SENDAI, JAPAN - Despite ominous predictions of mass devastation in cyclone-wrecked Vanuatu, policymakers at a UN disaster meeting in Japan do not seem to understand the pressing need to tackle climate change, the World Bank warned Sunday. 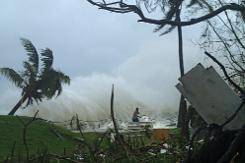 Handout photo taken on March 14, 2015, by CARE Australia shows a man running away from high waves caused by Cyclone Pam crashing along the coast in the Vanuatu capital of Port Vila

A state of emergency has been declared in the impoverished Pacific nation, where dozens are feared dead after one of the most powerful storms ever recorded smashed through. Aid agencies have spoken of "grave fears" over the scale of the human tragedy.

But Rachel Kyte, World Bank vice president and special envoy for climate change, said there appeared to be a disconnect between policy and the increasingly frequent weather-related disasters the world is suffering.

"I worry that a sense of urgency and a sense of shared ambition is not at the right level," she told AFP in an interview on the sidelines of the UN Conference on Disaster Risk Reduction in Sendai, Japan.

"It's hugely ironic that this storm should hit Vanuatu while we are all here. If we truly care for those people, we have to respond," she said, referring to the need for environmental commitments.

"I think we have to hold ourselves accountable and at least voluntarily we should have targets" from the Sendai conference on disaster risk reduction, she said.

The official death toll from Super Cyclone Pam, a maximum category five storm that swept through Vanuatu, stood at six on Sunday, although the UN had unconfirmed reports of 44 people killed in just one province.

Aid agency Oxfam said up to 90 percent of houses in the capital Port Vila were damaged as winds of up to 320 kilometres (200 miles) an hour lashed the country on Friday night.

It said the scale of the disaster would not be known until reports filter in from outlying islands.

"This is likely to be one of the worst disasters ever seen in the Pacific, the scale of humanitarian need will be enormous... entire communities have been blown away," said Oxfam's Vanuatu director Colin Collet van Rooyen.

Vanuatu's President Baldwin Lonsdale used the Sendai conference to make an emotional appeal for help from the international community, telling representatives of 190 countries that his archipelago country needed "a lending hand".

Anote Tong, President of Kiribati which was also hit by the cyclone to a lesser extent, said policymakers are beginning to share the perception "that climate change has exacerbated the severity of natural disasters and (their) frequency, that's worsening the impacts on different communities".

"I put forward this argument that climate change and disasters are so integrated and so related," he said.

The conference comes ahead of COP 21 talks scheduled for December in Paris, at which countries will try to thrash out agreements on cutting greenhouse gases.

French Foreign Minister Laurent Fabius, who will chair the meeting, told AFP Sendai could act as a springboard to success later in the year.

As NGOs scrambled to meet immediate needs like clean water, sanitation, food and shelter, the World Bank's Kyte said there must be a recognition of the growing role that rising global temperatures were playing.

"I don't think I would say climate change caused (Cyclone) Pam, but I would say the fact is in the past three or four years we've seen category fives coming with a regularity we've never seen before" Kyte said.

"And that has some relationship with climate change," she said. "It is undisputable that part of the Pacific Ocean is much warmer today than in previous years, so these storms are intensifying.

"We may have helped communities become resilient to the kinds of storms we experienced in the past, but resilience to a storm with wind speed of up to 300 kilometres per hour -- that's a whole new intensity," she said.

Her thoughts were echoed by UN Development Programme chief Helen Clark, a former prime minister of New Zealand, who said it was "impossible" to insulate against disaster without addressing one of its root causes.

"Unless we tackle climate change on the global level we are making the task of building resilience to disasters almost impossible," she said.