ABIDJAN - Across Africa, where many nations show high economic growth rates but with little benefit to their populations, the notion of social and economic "emergence" is taking hold as a remedy for perennial pessimism. 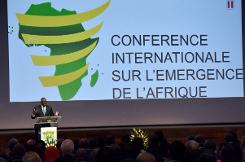 Senegalese President Macky Sall delivers a speech at the opening of the "International Conference on the Emergence of Africa", on March 18, 2015 in Abidjan

The term has become a buzzword among international donors and African politicians who take it to mean a fairer distribution of wealth and other measures that benefit society at large.

About 30 countries on the continent have signed up to the doctrine, according to the United Nations. Ivory Coast's President Alassane Ouattara, who hosted a regional conference on the theme this week, has grabbed on to the promise of economic emergence as he plans to seek re-election in October.

Emergence, modelled on the success of the "baby tigers" of Asia -- Indonesia, Malaysia and Vietnam -- as well as Brazil, Chile and Colombia in South America, is presented as the opposite of a capitalist and dehumanised economic vision.

"For me, the goal of emergence is not GDP (gross domestic product) growth per se: it is the pursuit of greater human health and happiness so that each one of us can fulfil our potential and participate fully in our societies," said Helen Clark, administrator for the UN Development Programme.

Ivory Coast, the world's leading cocoa producer, barely four years ago came out of a political and military crisis after a bloody decade. It has since achieved an annual growth rate of 9.0 percent and is due to be an "emerging" economy by 2020, Ouattara told the conference, though the Ivorian opposition considers that goal far-fetched.

Leaders elsewhere in Africa are less ambitious but equally determined. Chad was aiming to emerge in 2020 but has revised the date to 2030, like Togo. More cautiously, Senegal's rulers are looking to 2035 to attain key goals.

"In addition to being strong and sustainable, the growth that leads us to emerge should generate jobs, force down unemployment and reduce social inequalities," Senegalese President Macky Sall said during the forum.

The UN's Clark envisaged that "by 2050, an 'emergent Africa' would have tripled Africa’s share of global GDP, enabled 1.4 billion Africans to join the middle class, and reduced tenfold the number of people living in extreme poverty. These are exciting prospects."

Investment in health and education and reducing inequalities between cities and the countryside and between men and women, along with diversifying the economy and appropriate infrastructure projects, are among means cited by experts to reach emergent targets.

On a continent where 300 million inhabitants were considered middle-class citizens by the African Development Bank (ADB) in 2011, out of an overall population of around one billion, "Afro-pessimism is now giving way to optimism," Ivory Coast's Planning Minister Albert Toikeusse Mabri asserted.

"The African narrative has changed. Just a while ago, Africa was a place which was exceptional, but for negative reasons. It was a place where there was no growth, no law," said ADB vice-president Steve Kayizzi-Mugerwa.

"People would say, 'Yeah, that's Africa', where there was war, quick death, no accountability," he said, before adding how things have changed.

South Africa, Botswana, Mozambique, Kenya and more recently, Ivory Coast, have sparked a more positive outlook on the continent, impressing the financial community with their success in development terms.

The ideas discussed at the conference mean that "economic growth without social benefits isn't inevitable", said Makhtar Diop, vice-president of the World Bank for Africa, adding that the "redistribution of wealth" was vital for "social wellbeing".

However, participants pointed out that emergent development is hampered by undue dependence on a single resource, like Nigeria and Angola which rely on their oil exports. Massive corruption and a lack of economic integration are also barriers to success.

Capital flight costs Africa between 60 and 100 billion dollars a year, said Dieye of the UNDP. "With good governance, you see what could be injected back into African economies."