YANGON - Myanmar authorities have begun collecting temporary identification cards from displaced Rohingya Muslims in unrest-torn Rakhine state, an official said Wednesday, a move that the UN has warned could strip them of all documentation. 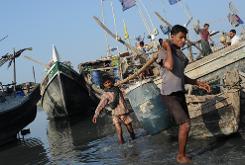 The United Nations have previously described the Rohingya as one of the world's most persecuted minorities.

Officials, backed by security forces, visited almost a dozen camps for people displaced by violence between Buddhists and Muslims in the western state.

They asked people there to hand back the so-called "white cards", following a shock presidential declaration in February that they would expire on March 31.

"Immigration officers said yesterday that the situation was OK. They collected (the cards) from 11 camps, with security personnel," Rakhine government communications officer Hla Thein told AFP, adding that he did not know how many cards had been collected.

Hundreds of thousands of people, mainly from the Rohingya minority, are thought to hold white cards -- ostensibly as part of a process of applying for citizenship.

The issue became a flashpoint in February when President Thein Sein announced that the cards would become invalid.

He was responding to a row over a parliamentary bill that would have allowed holders of temporary identification papers to vote in a referendum on constitutional amendments. The idea sparked protests from Buddhist nationalists.

The Rohingya, who are considered by the United Nations to be one of the world's most persecuted minorities, are referred to by the government as "Bengali" and are largely seen as illegal immigrants from Bangladesh.

It was not immediately clear whether those whose cards were taken were able to begin a citizenship application process.

"People are worried about the white cards being taken back. They don't have other identification," said Abu Tahay, leader of the National Democratic Party for Development which campaigns for Rohingya rights.

But he said there "won't be conflict because of this" in Rakhine, where communal violence in 2012 left around 140,000 people -- mainly Muslims -- trapped in makeshift displacement camps.

Many of Myanmar's roughly 1.3 million Rohingya are stateless and subject to a tangle of restrictions.

Rights groups say that many lost crucial documents in the wave of arson attacks that swept Rakhine three years ago.

The UN Special Rapporteur on Myanmar, Yanghee Lee, raised concerns about the white card expiry in a recent report on the former junta-run nation, saying the move would "deny persons belonging to the Rohingya minority any form of identification and the right to vote".

Rakhine's unrest sparked outbreaks of religious violence across the Buddhist-majority country, overshadowing its democratic transition and coinciding with the rising prominence of nationalist monks.