KUALA LUMPUR - A Malaysian political cartoonist known for skewering the country's ruling regime was charged on Friday with what his lawyer called a record nine counts of sedition, one of dozens of targets in a deepening clampdown on civil liberties. 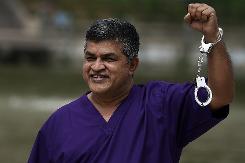 Malaysian cartoonist Zulkifli Anwar Ulhaque, popularly known as Zunar, poses with handcuffs prior to a book launch event in Kuala Lumpur, on February 14, 2015

Zulkifli Anwar Ulhaque -- who goes by the pen name Zunar -- has faced sedition charges previously for his cartoons and had collections of his works banned, but the current charges stem from his Twitter criticism of the February jailing of opposition leader Anwar Ibrahim.

"They are really trying to shut me off from criticising the government, so I think it's clearly politically motivated," a defiant Zunar said as he arrived at a Kuala Lumpur courthouse to face the charges dressed in a mock prison jumpsuit and clowning for journalists with a set of handcuffs.

A single sedition conviction can result in three years in jail.

"We will fight this. Sedition is being used in the most ridiculous fashion," she said.

The ruling coalition, which has been in power for 58 years, keeps a tight rein on mainstream media and moves to squelch criticism of frequent corruption scandals and rights abuses.

But following its worst-ever showing in 2013 elections against the Anwar-led opposition, Prime Minister Najib Razak's government has launched an accelerating free-speech clampdown.

Dozens of government critics, including opposition politicians, academics, activists, and journalists, have been arrested for sedition or other charges that rights and legal groups call highly questionable.

Most have been released shortly afterward pending court proceedings.

The United States has said the Anwar case raised questions over judicial independence. Malaysia's government and judiciary have denied politics influenced the case.

Following Zunar's tweets, police also seized a cache of his latest cartoon compendium, which took aim at the Anwar trial, allegations of government corruption, and the widely alleged luxurious lifestyle of one of Zunar's favourite targets -- Najib's wife Rosmah Mansor.

Human Rights Watch has called Zunar's case part of a government blitz to turn "peaceful criticism into a criminal act that threatens the state".

Zunar's cartoons are published by leading news portal Malaysiakini. Several books of his collected works have been banned over the years.

Police earlier this week charged the head of a prominent independent media group and four of the group's editors with sedition.

The group had published a series of reports suggesting fraudulent dealings involving a government-owned investment company launched by Najib, and huge sums of missing funds.