In this April 12, 1975 file photo, US marines provide cover during Operation Eagle Pull as Americans and Cambodians board marine helicopters in Phnom Penh during the final US pullout of Cambodia. Five days later, the US-backed government fell as communist Khmer Rouge guerrillas stormed into Phnom Penh. (AP photo)

PARIS — Twelve helicopters, bristling with guns and US Marines, breached the morning horizon and began a daring descent toward Cambodia's besieged capital. Residents believed the Americans were rushing in to save them, but at the US Embassy, in a bleeding city about to die, the ambassador wept.

Forty years later, John Gunther Dean recalls one of the most tragic days of his life -- April 12, 1975, the day the United States "abandoned Cambodia and handed it over to the butcher."

"We'd accepted responsibility for Cambodia and then walked out without fulfilling our promise. That's the worst thing a country can do," he said in an interview in Paris. "And I cried because I knew what was going to happen."

Five days after the dramatic evacuation of Americans, the US-backed government fell to communist Khmer Rouge guerrillas. They drove Phnom Penh's 2 million inhabitants into the countryside at gunpoint. Nearly 2 million Cambodians -- one in every four -- would die from executions, starvation and hideous torture.

Many foreigners present during the final months remain haunted to this day by Phnom Penh's death throes, by the heartbreaking loyalty of Cambodians who refused evacuation and by what Mr Dean calls Washington's "indecent act." 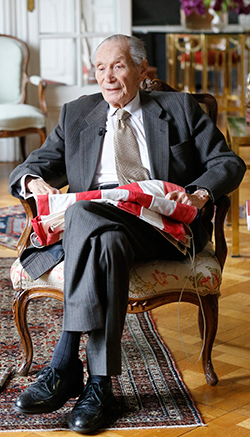 In this photo taken on March 19, John Gunther Dean, the last US ambassador to Cambodia before it fell to the Khmer Rouge in 1975, is interviewed by the Associated Press in Paris. (AP photo)

I count myself among those foreigners, a reporter who covered the Cambodian War for The Associated Press and was whisked away along with Mr Dean and 287 other Americans, Cambodians and third country nationals. I left behind more than a dozen Cambodian reporters and photographers -- about the bravest, may I say the finest, colleagues I've ever known. Almost all would die.

The pullout, three weeks before the end of the Vietnam War, is largely forgotten, but for historians and political analysts, it was the first of what then-US Secretary of State Henry Kissinger termed "bug-outs."

The fall of Phnom Penh

"It was the first time Americans came anywhere close to losing a war. What worries me and many of us old guys who were there is that we are still seeing it happen," said Frank Snepp, a senior CIA officer in Saigon and author of "Decent Interval," which depicts the final years of the Vietnam War. After Cambodia and Vietnam came Laos; there would be other conflicts with messy endings, like Central America in the 1980s, Iraq and -- potentially -- Afghanistan.

Today, at 89, Mr Dean and his French wife reside in an elegant Paris apartment graced by statues of Cambodian kings from the glory days of the Angkor Empire. A folded American flag lies across his knees, the same one he clutched under his arm in a plastic bag as he sped to the evacuation site. Captured by a photographer, it became one of the most memorable images of the Vietnam War era.

In the apartment's vestibule hangs a framed letter signed by President Gerald R. Ford and dated Aug 14, 1975. It highlights that Mr Dean was "given one of the most difficult assignments in the history of the Foreign Service and carried it out with distinction."

"I tried so hard," he adds. "I took as many people as I could, hundreds of them, I took them out, but I couldn't take the whole nation out."

The former ambassador to four other countries is highly critical of America's violation of Cambodian neutrality by armed incursions from neighbouring Vietnam and a secret bombing campaign in the early 1970s. 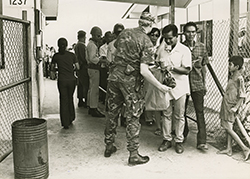 Spectrum looks back on the 40th anniversary of the fall of Phnom Penh with two stories. Alan Parkhouse, one of the few photographers who documented the calm before the carnage, tells his story in words and images. Denis Hruby writes about how, having cleared large areas of Cambodia's countryside of land mines, the deminers are turning their attention to the dangers in the waterways.

The US bombed communist Vietnamese sanctuaries and supply lines along the Vietnam-Cambodia border, keeping Cambodia's Lon Nol government propped up as an anti-communist enclave, but it provided World War II aircraft and few artillery pieces to Phnom Penh forces fighting the Khmer Rouge.

In his memoirs, Mr Kissinger said the US had no choice but to expand its efforts into the neighbouring country which the North Vietnamese were using as a staging area and armoury, and that anti-war sentiment prevented it from giving Cambodia more assistance.

Mr Dean is bitter that Washington did not support his quest to persuade ousted Cambodian King Norodom Sihanouk to return from exile and forge a coalition between the Khmer Rouge and Lon Nol. It was Mr Dean's "controlled solution."

"Ambassador Dean never had (President Richard) Nixon's or Kissinger's support because both of them wanted out of Indochina," Mr Snepp said, though he, and some historians, doubt that Mr Dean's plan could have worked.

By early 1975, the embassy's cables, most of them declassified in 2006, were becoming increasingly frantic.

Meeting me one day, a haggard Mr Dean, who had lost 15 pounds, asked rhetorically: "Isn't there any sense of human decency left in us?"

The Khmer Rouge were tightening their stranglehold on the capital, shutting down its airport from which the embassy had flown out several hundred Cambodians. An April 6 cable from Mr Dean said the Cambodian government and army "seem to be expecting us to produce some miracle to save them. You and I know there will be no such miracle."

Congress was cutting the aid lifeline to Phnom Penh. The American public had had enough of the war. Among Cambodians in-the-know, some anti-American feeling was growing.

"We in Cambodia have been seduced and abandoned," Chhang Song, a former information minister, said one night in early 1975.

But among Phnom Penh residents I found only smiles.  "Americans are our fathers," one vegetable vendor told me -- along with a never-never-land mindset that things would turn out to be all right. Somehow.

The morning of the evacuation, Mr Dean sat in his office one last time and read a letter from Prince Sirik Matak in which the respected former deputy prime minister declined evacuation and thus sealed his own death. It read: "I never believed for a moment that you have this sentiment of abandoning a people which has chosen liberty. I have only committed this mistake of believing in you the Americans." 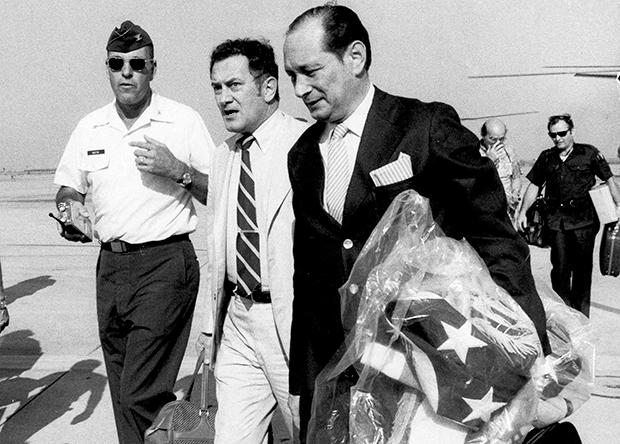 In this April 12, 1975, file photo, US ambassador to Cambodia John Gunther Dean carries the American flag from the US embassy in Phnom Penh as he arrives at U-Tapao Air Force Base in Thailand following the evacuation by helicopter and aircraft carrier. (AP photo)

Mr Dean today describes it as the "greatest accusation ever made by foreigners. It is wrenching, no?"

His embassy closed down at 9.45am, the evacuees driven to a soccer field. The "Jolly Green Giant" helicopters were setting down. The Marines fanned out to form a security cordon, but fears of Cambodian reprisals proved unfounded.

Children and mothers scrambled over fences to watch. They cheered, clapped and waved. A Cambodian military policeman smartly saluted Alan Armstrong, the assistant defence attaché. Disgusted and ashamed, Armstrong dropped his helmet and rifle, leaving them behind.

I tried to avoid looking into faces of the crowd. Always with me will be the children's little hands aflutter and their singsong "OK, Bye-bye, bye-bye."

Five days later we received a cable from Mean Leang, an ever-jovial, baby-faced AP reporter who had refused to seek safety. He wrote about the brutal entry of the Khmer Rouge into the city, its surrender and its gunpoint evacuation. "I alone in office, losing contact with our guys. I feel rather trembling," he messaged. "Do not know how to file our stories now ... maybe last cable today and forever."

Barry Broman, then a young diplomat, remembers a Cambodian woman who worked upcountry monitoring the war for the embassy who had also refused evacuation.

Denis Gray, who covered the Cambodian War, was evacuated from Phnom Penh 40 years ago.

International university students wait as China remains closed to them

Blinken to visit Indonesia and Malaysia next week