PARIS - French Foreign Minister Laurent Fabius said Thursday that the sentencing to death of a Frenchman in Indonesia was the result of "serious dysfunctions" in the country's legal system. 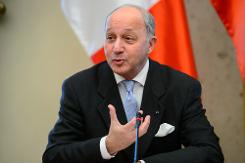 Fabius said Serge Atlaoui, 51, had been the victim of a hasty trial and was sentenced "in a ruling containing erroneous statements" in a letter to Indonesian Foreign Minister Retno Marsudi.

Atlaoui's final appeal was rejected on Tuesday, taking him closer to execution by firing squad for his role in a clandestine ecstasy lab near Jakarta.

The ruling has strained ties between France and Indonesia and has seen appeals from his family as well as President Francois Hollande for him not to be executed.

"The eventual execution of Mr Atlaoui would be even more incomprehensible to the government and French people as, due to serious dysfunction in the Indonesian legal system, he did not benefit from his due rights," wrote Fabius.

He said it was "particularly shocking" that the Supreme Court decision was handed down in only a few weeks without calling witnesses, while the Indonesians accused of running the drugs lab had over a year of hearings.

"This is a discriminatory procedure against one of our citizens who does not benefit from the same guarantees as Indonesian citizens in the same case."

Fabius said the death sentence contained errors describing Atlaoui as a chemist while witness statements proved he was working as a welder in the factory where the drugs were being produced.

France "urgently requests that Indonesia respect its own rule of law and international obligations of the convention to which it belongs," said Fabius, urging the country to grant Atlaoui clemency.

Imprisoned in Indonesia for a decade, the father-of-four has always denied the charges, saying he was installing industrial machinery in what he thought was an acrylics factory.

He is one of several foreign drug convicts on death row in Indonesia who recently lost appeals for presidential clemency, typically a last chance to avoid the firing squad. They are expected to be executed once final legal appeals are resolved.

Hollande warned Indonesia on Wednesday that executing Atlaoui would damage ties between the two nations.

If put to death, Atlaoui would be the first Frenchman to be executed anywhere in nearly 40 years.

Drug laws in Indonesia are among the world's toughest.

President Joko Widodo, who took office in October, has been a vocal supporter of putting drug traffickers to death, saying the country is facing a narcotics emergency.

In January, the country executed six people accused of drug trafficking, including Brazilian and Dutch nationals.

As such, analysts say France's repeated calls for clemency have little chance of succeeding.

Rescuing trapped grandkids via kayak -- the aftermath of Hurricane Ian