KATHMANDU - Nepalese riot police struggled Wednesday to hold back thousands of residents trying to leave the earthquake-hit capital Kathmandu as anger mounted at the lack of buses being laid on by the authorities. 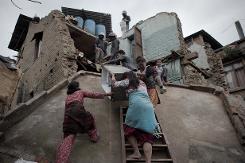 Residents manouver a fridge out from the rubble of their destroyed house in Sankhu, on the outskirts of the Nepalese capital Kathmandu, on April 29, 2015.

Riot police were deployed to the main bus station, near parliament, after large crowds gathered from before dawn following an announcement that extra services would be organised, according to an AFP correspondent at the scene.

Scuffles broke out between crowds and authorities as the buses failed to materialise.

"We have been waiting since dawn. They told us that there would be 250 buses coming but we haven't seen any of them," said Kishor Kavre, a 25-year-old student who was among the crowds hoping to leave the city.

"We're in a hurry to get home to see our families but we've no idea when they're coming now. I think the government is struggling."

Although aftershocks have begun to subside, hundreds of thousands of people were still sleeping outside in the streets as their homes had either been wrecked or else feared to be on the verge of collapse.

A total of 5,057 are so far known to have died in Nepal alone after Saturday's massive earthquake, and around 100 more in neighbouring India and China.