YANGON - Myanmar's Aung San Suu Kyi on Thursday praised the "co-operative spirit" of political rival Shwe Mann, after the powerful parliament speaker -- tipped as a potential presidential candidate -- said he is open to an alliance with the opposition leader. 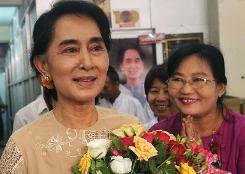 Myanmar's opposition leader Aung San Suu Kyi leaves after speaking to supporters at the National League for Democracy headquarters in Yangon, on May 7, 2015.

Suu Kyi is expected to lead her party to victory at elections slated for November, but she is currently barred from Myanmar's top job because of a junta-era constitution apparently written explicitly to exclude her.

As no other opposition figure has yet emerged to stand for the post, which will be selected by parliament following the general election, there has been widespread speculation that the Nobel laureate would opt to forge an alliance with the speaker, despite his previous position as the former junta's number three.

The veteran activist, who was locked up for more than 15 years before the country began emerging from military rule in 2011, praised suggestions by Shwe Mann in Washington last week that he would be open to some form of coalition.

But she stopped short of endorsing the idea.

"This kind of co-operative spirit is good. We welcome it," Suu Kyi told AFP at her National League for Democracy party headquarters in Yangon.

This year's elections are seen as a key test of Myanmar's transition from outright army rule and could be the best chance in decades for the country to step closer towards democracy.

But Suu Kyi is barred from the presidency by a constitutional provision excluding those with foreign children from the top office. Her two sons are British.

She has declined to rule out a boycott of the polls, as the NLD struggles to amend the charter because of staunch opposition by the military, who have an effective veto on major changes.

Shwe Mann, who is also head of the ruling party dominated by former soldiers, said if nominated he hoped that he could become president, adding that he would also be open to an alliance with Suu Kyi "for the interest of the country and the people".

"I am ready to cooperate with Daw Aung San Suu Kyi today, tomorrow and in the future as well," he said, in remarks at the Carnegie Endowment For International Peace on Saturday. Daw is a term of respect in Myanmar.

But the opposition said it currently has no plans to form a coalition.

"The NLD hasn't laid down its policy to cooperate with other parties yet," spokesman Nyan Win told AFP.

Another round is expected after parliament resumes on May 11.