PARIS - Sea-level rise is accelerating, not declining as some have hoped, scientists said on Monday citing meltwater from Earth's ice sheets as the likely cause. 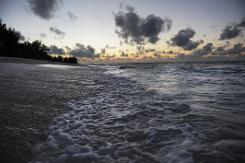 Sea-level rise is accelerating, not declining as some have hoped, scientists said on Monday citing meltwater from Earth's ice sheets as the likely cause

This accelerated to 3.2 mm per year between 1993 and 2010, the IPCC said in its landmark Fifth Assessment Report.

But in 2014, another study raised a big question.

In the past decade, it said, sea-level rise had been much lower than the previous decade.

That raised hopes in some quarters that, far from being an inexorably rising threat, sea levels could fluctuate in response to some hidden but natural variability.

The new study deals a blow to this scenario.

Both the IPCC estimate and the 2014 paper were based on satellite observations of sea levels.

But they were unable to take an important variable into account: something called vertical land motion.

This is natural movement in the height of the Earth's land surface, which can happen through subsidence, earthquakes or uplift.

For instance, parts of the northern hemisphere are still rising after the end of the last Ice Age -- the land was crushed by glacial weight and even today is slowly "rebounding," thousands of years after the ice melted.

The new study, published in the journal Nature Climate Change, takes land movement into account, along with an important statistical tweak -- hourly data from a network of tide gauges deployed around the world's oceans.

The bad news is that the first six years of the satellite data -- 1993 to 1999 -- is the period that is most affected by these corrections.

That mean in more recent years the rate of sea-level rise has actually increased rather than declined, according to the paper, led by Christopher Watson of the University of Tasmania, Australia.

The acceleration "is higher than the observed twentieth-century acceleration but in reasonable agreement with an accelerating contribution from the Greenland and West Antarctic ice sheets over this period," the team said.

It is also consistent with the IPCC's projections for an additional 0.07 mm rise in the early decades of the 21st century, they added.

The IPCC projected that the global mean sea level would rise by between 40 and 63 cm by the end of this century, depending on how much heat-trapping carbon gases are emitted.

These figures do not include margin of error. At the top end of the range, the 63 cm could be as high as 82 cm.

Ocean rise has huge implications for the hundreds of millions of people who are coastal dwellers.

Their cities could be threatened by ground erosion, flooding and storm surges, and their groundwater imperilled by saltwater intrusion.

But it is also one of the most vexed questions in climate science, given the many uncertainties.

Computer models have to try to estimate how much of the rise is due to thermal expansion -- warming of the water -- or to runoff from ice sheets, glaciers or permafrost.

They also have to calculate the extreme time it takes for a vast body of water to respond to temperature change.

The IPCC said the loss of Greenland's icesheet had probably increased from 34 billion tonnes per year in the decade to 2001 to 215 billion tonnes a year over the following decade.

The Office of Insurance Commission (OIC) and insurers have agreed in principle to provide insurance products with coronavirus coverage for both foreign visitors and locals.