Protesters hold up a banner ahead of a demonstration against Rohingya boat migrants originating from Myanmar in Yangon on Wednesday. (AFP photo)

YANGON — More than 100 Buddhist nationalists, including monks and nuns, marched here Wednesday in protest at the international portrayal of the country's role in the Rohingya boat-migrant crisis.

"Most foreign countries and organisations including the United Nations are blaming Myanmar as a source of the boatpeople crisis," said Sayadaw Pamaukkha, a prominent Yangon abbot and co-organizer of the rally.

Thousands of migrants, mostly from Myanmar's ethnic Rohinyga Muslim group and Bangladesh, have been found at sea off Indonesia, Malaysia and Thailand in recent weeks.

There has been international pressure on those countries to help them, but also on Myanmar to look into the pressures that drove them to leave. 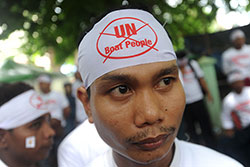 A protester wears a headband against Rohingya boat migrants originating from Myanmar, who are largely seen as illegal immigrants from Bangladesh and referred to as 'Bengali'. (AFP photo)

"Foreign media are saying Myanmar is a land of discrimination against Muslim people," Sayadaw Pamaukkha said. "This is not true, we have lived together with Muslims here for centuries.

"We have no problem with Burmese Muslims. But we don't want Bengali Muslims becoming Myanmar citizens or settle in our land as refugees," he said.

The Muslim Rohingyas, established in the western state of Rakhine for generations, are not on the list of Myanmar's official ethnic groups, and consequently not eligible for citizenship. The authorities consider them immigrant ethnic Bengalis.

"Most boatpeople are not Myanmar" read a placard held by one protester as the group marched to a stadium to give speeches opposing the repatriation of Rohingya would-be migrants to Myanmar.

More than 3,500 Bangladeshi and Rohingya migrants have landed on the shores of Thailand, Malaysia and Indonesia in recent weeks. Around half identified as Rohingya, saying they had fled persecution.

Myanmar's navy seized a boat used by people smugglers last week, and announced that the 200 people found aboard were mostly Bangladeshi economic migrants.

They have been held in Maungtaw town in Rakhine state close to the Bangladesh border, and would be deported to their country soon, state-run media said.

"Bangladesh must take back its people," said Htet Arkar, another organiser of Wednesday's march.

"They are trying to stay in our land as refugees. No, we don't accept it. So we say to the UN, you can take these people to your refugee camps in Bangladesh."

Almost 140,000 of the 1 million Rohingya in Rakhine were displaced in deadly clashes with majority Buddhists in 2012. 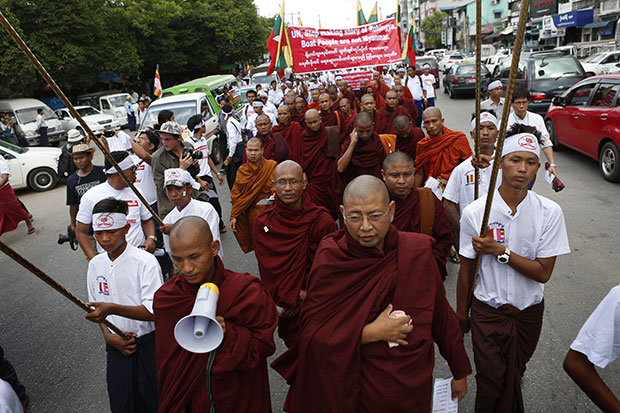 Buddhist Myanmar monks march defending Myamar's actions as nationalists demonstrate against what they claim is bias in reporting by the United Nations, NGO's and international media organisations about the migrant 'boatpeople' crisis and Myanmar's treatment of Rohingyas, in Yangon May 27. (EPA photo)

The opposition leader calls for the prime minister's resignation as parliament meets in special session, but the protesters' focus is the German embassy.

Tanzanians to vote as alarm soars over stifling of democracy