MANILA - One of the Philippines' top nightclubs has issued an apology after its bouncers barred a transgender fashion designer from entering, triggering outrage in celebrity circles. 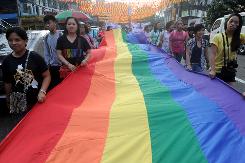 The conservative, largely-Catholic Philippines does not have a law forbidding discrimination against gays and transgender individuals and does not recognise same-sex marriage.

The management of the Valkyrie, in an uptown suburb of Manila, issued a statement on Tuesday stressing they do not discriminate against "transwomen and transgender individuals."

"The Club does not refuse entry on the basis of an individual's sexual orientation. The Club has, on many previous occasions, welcomed transgender guests into its premises," said the statement, a copy of which was obtained by AFP on Wednesday.

The apology came after popular designer Veejay Floresca was denied entry into the fashionable nightclub earlier this month.

Floresca said she was barred from Valkyrie on June 12 with a bouncer telling her "cross-dressers are not allowed."

On June 20, she tried to enter another uptown establishment, the Pool Palace Club, owned by the same company, but was blocked by a bouncer who questioned her California ID card, identifying her as a woman.

"No, you are still a man," she quoted the bouncer as saying. However, a woman at the club intervened and got Floresca inside, she added.

The incidents touched off a firestorm with many accusing the management of discrimination.

Vice Ganda, one of the country's most popular comedians, who is a part-owner of Valkyrie, said in a tweet: "The 'No Crossdressing Policy' in any establishment is so THIRD WORLD. If Valkyrie implements this crap I will pull out my very small share."

TV talk show host Boy Abunda, who is gay, also expressed support for Floresca, saying, "Whether you are a cross-dresser or a transgender woman... you still have rights."

The management said the clubs' personnel were only enforcing a policy to deny entry to someone if they doubt that person is presenting an authentic identification card, the statement said.

"Club management recognises, however, that it may be necessary to provide further training to its staff to ensure that they are better able to communicate the club’' guidelines and policies to its patrons in order to avoid misunderstanding in the future," it added.

The conservative, largely-Catholic Philippines does not have a law forbidding discrimination against gays and transgender individuals and does not recognise same-sex marriage.

However a USAID study in 2014 said that "Filipinos are generally accepting of LGBT (lesbian, gay, bisexual and transgender) people," with some local communities having ordinances barring discrimination.