SYDNEY - Former British migrants who were physically and sexually assaulted at a notorious school in Australia on Monday won the largest compensation payment for survivors of mass child abuse in the country's legal history. 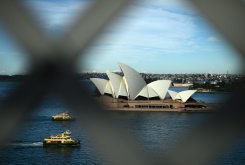 The number of child migrants sent to Australia is not known, but the government estimates that from 1947 to 1967, between 7,000 and 10,000 children arrived, the vast majority from Britain

A class action lawsuit was brought by almost 150 former residents of Fairbridge Farm School, which housed British child migrants, against the Australian and New South Wales state governments after they were abused between 1938 and 1974.

"Our clients have suffered a lifetime of serious physical and psychiatric injuries as a result of their time at Fairbridge," Sandhu said, adding that it was the largest settlement for survivors of mass child abuse ever in Australia.

"They were all vulnerable children in need of care and protection, but instead they were subjected to horrific physical and sexual abuse, which in many cases has scarred them for life."

The case was one of the first class actions against an Australian government connected with child migration -- a practice under which thousands of underprivileged British children were sent to Australia without their parents last century in the hope of giving them a better life.

It alleged the Fairbridge Foundation, the New South Wales government and the Australian government allowed a system of institutional abuse to develop and persist at the school over decades.

Lawyers said hundreds of students, some as young as four, arrived from Britain at the school in the New South Wales town of Molong and often never saw their parents again.

Many told of being physically and sexually abused by staff.

Former Fairbridge residents Geraldine Giles and Vivian Drady acted as lead claimants in the class action which began in December 2009.

"No amount of money can take the flashbacks and memories out of my head," Giles said.

"But the settlement shows that what happened at Fairbridge should never have happened and that we deserved better."

Sandhu said the agreement avoided an eight-week trial, which was due to start later this year.

"Ms Giles and Ms Drady showed immense courage and fortitude in bringing this claim on behalf of others at a great personal and emotional toll," Sandhu said.

Slater and Gordon said the New South Wales Department of Family and Community Services had provided a full and unqualified apology and the Fairbridge Foundation had agreed to do the same.

The number of child migrants sent to Australia is not known, but the government estimates that from 1947 to 1967, between 7,000 and 10,000 children arrived, the vast majority from Britain, with most placed in institutional care.

The settlement comes with Australia in the midst of a national inquiry into institutional responses to child sex abuse after a decade of pressure to investigate wide-ranging allegations of paedophilia in Australia.

Tedros, from 'child of war' to two-term WHO chief