Japan woos Mekong leaders in battle with China for influence

Japan rolled out the red carpet Friday for the leaders of Thailand and other "Mekong Five" countries as it pushes infrastructure exports and courts influence in a region where rival China has an increasing presence.

Prime Minister Shinzo Abe will meet with his counterparts from Thailand, Cambodia, Laos, Myanmar and Vietnam -- fast-growing economies through which the lower section of the Mekong Rver flows -- at the seventh annual "Japan-Mekong" summit in Tokyo on Saturday.

The morning meeting, which will be followed by a series of bilateral summits, will focus on developing "high-quality infrastructure partnerships" and adopting "new strategies for Japan-Mekong cooperation," chief cabinet secretary Yoshihide Suga, Tokyo's top spokesman, said this week.

Mr Abe has doubled efforts to sell highways, train systems and power plants around the world, a key element in his bid to bolster the economy and Japan's standing abroad.

"Japan has traditionally maintained favourable relations with the Mekong states and they remain important destinations for Japanese investment," said Yoshinobu Yamamoto, professor at the University of Niigata prefecture.

The meeting comes as the leading Nikkei business daily said Friday that three Japanese companies had secured an order worth over 32 billion baht to equip a railway linking Bangkok with nearby suburbs.

Under the plan, trading house Sumitomo will oversee the project while Hitachi will supply 130 train cars, with Mitsubishi Heavy Industries providing signal systems and transformer facilities.

The Japanese government plans to offer loans to cover part of the cost, the newspaper said, a common sweetener that helps clients afford these kind of big-ticket projects. 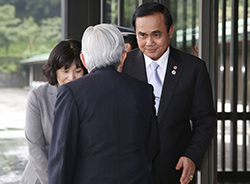 Japan's Emperor Akihito (back to camera) sees Thailand's Prime Minister Prayut Chan-o-cha off after a tea ceremony for the leaders of the Mekong countries, at the Imperial Palace in Tokyo on July 3. (AFP photo)

Beijing's growing financial muscle, as well as its increasing willingness to throw its diplomatic weight around, have quickened the need for Japan to step up its engagement in the battle for regional sway.

"The summit is part of Japan's effort to maintain important ties at a time when China is expanding its influence in the region," Mr Yamamoto said.

Chinese Premier Li Keqiang said in November at a summit in Myanmar that the China-Asean strategic partnership, having experienced a "golden decade" of development, was entering a "diamond decade leading to broader and deeper cooperation".

Then in March, foreign minister Wang Yi said China hoped to boost two-way trade with the 10 countries comprising the Association of Southeast Asian Nations to US$500 billion this year and $1 trillion in 2020.

In a bid to counter the Chinese move, Mr Abe in May announced a $110 billion investment plan for infrastructure projects in Asia, including in the "Mekong Five" states.

Japan is keen to be seen as the benevolent giant in the region and has worked hard to burnish a reputation as the nation bold enough to push back against China in territorial and other disputes.

Tokyo has its own spat with Beijing over islands in the East China Sea, but is increasingly vocal over China's ambitions to control almost the whole of the South China Sea.

Vietnam is one of a number of countries that have territorial disputes with Beijing over this busy shipping area.