YANGON - Myanmar officials on Wednesday announced November 8 as the date for a historic general election set to be the first contested by Aung San Suu Kyi's opposition in a quarter of a century. 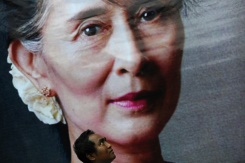 The announcement fires the starting gun for the much-anticipated poll in the former junta-run nation, which has launched a series of reforms since the end of outright military rule in 2011.

"The general election will be held on November 8. The Union Election Commission will announce further details later," Thant Zin Aung, deputy director of Rangoon's election commission, told AFP of the vote, which will select MPs for both houses of parliament.

A president will be chosen later by parliament, but Suu Kyi is barred by the constitution from taking the top job.

The Nobel laureate's National League for Democracy did not immediately confirm it would participate in the polls.

"We cannot say whether we will take part right now. We need to hold a meeting to make a decision," spokesman Nyan Win told AFP.

The party won nationwide polls in 1990, while Suu Kyi was under house arrest, but was prevented from taking power by the military.

Protest breaks out at prison in Myanmar's biggest city