HANOI - US Secretary of State John Kerry arrived in Vietnam late Thursday to talk trade, regional security and mark the 20th anniversary of the establishment of diplomatic ties between the former wartime foes. 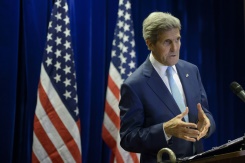 US Secretary of State John Kerry speaks during a press conference in Kuala Lumpur on August 6, 2015

Kerry is set to meet some of the communist country's top leaders and will hold talks with Foreign Minister Pham Binh Minh on topics ranging from the Trans Pacific Partnership trade deal to regional security.

Kerry arrived in Vietnam from Malaysia, where he told a security meeting hosted by the Association of Southeast Asian Nations (Asean) that the US would not tolerate navigation restrictions in the South China Sea.

Vietnam is locked in a longstanding maritime territorial dispute with China. Last year, the US partially lifted a 40-year ban on weapons sales in a bid to bolster Vietnam's coast guard capacities.

Kerry's visit will mark the 20th anniversary of the establishment diplomatic relations between the US and Vietnam, which were cut off for two decades after their bitter war ended in 1975.

Vietnam veteran Kerry served with the US Navy from 1966 to 1970 as a naval lieutenant. It was on his return after two tours of duty that he became a fierce campaigner against the war.

His visit is "a chance to not only reflect on what we’ve achieved since normalisation, but also to help set the course moving forward," a senior US state department official told reporters travelling with Kerry.

The trip aims to strengthen bilateral cooperation on regional security issues and help with implementation of the Trans Pacific Partnership, a vast US-led trade deal, of which Vietnam is part.

"Our push for positive steps by Vietnam on human rights, on labour... will be very much on the agenda," the official said.

One of the biggest sticking points for the TPP for Vietnam is labour standards, as the authoritarian country does not allow independent trade unions.

The Communist Party has run unified Vietnam since 1975. The one-party state is regularly denounced by rights groups for its intolerance of dissent.

Another 43.5 billion baht will be allocated to boost domestic consumption and local travel, officials said on Wednesday, as the government tries to revive a flagging, pandemic-hit economy.

China's #MeToo movement gets its moment in court

Joshua Wong defiant as he is jailed over 13 months