YANGON - More than 200 democracy activists gathered in Rangoon Saturday to launch a museum marking a 1988 uprising against military rule that ended in a bloody crackdown as Myanmar prepares for its freest elections in decades. 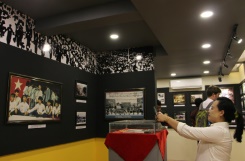 Visitors take photos at 8888 memorial hall which was opened in Yangon to mark the 27th anniversary of 1988 democracy uprising in Myanmar on August 8, 2015

Dozens of members of the 88 Generation activist group attended the opening to commemorate the start of mass student-led protests 27 years ago which were brutally crushed by the then-junta, leaving thousands dead.

The 8888 Memorial Hall, set across two storeys in a building in the eastern outskirts of Rangoon, showcased archive photographs from the period as well as a documentary about the students involved.

''This is the first museum to remember the democracy movement," Ant Bwe Kyaw, a key figure in the 1988 protests and a leader of the 88 Generation, told AFP, adding that the group aimed to open a larger venue in the future.

The 88 Generation also released a statement calling for the ''unconditional release" of political prisoners still languishing in jails before November's polls as well as of the dozens of activists detained over recent student-led protests over education reform.

On August 8, 1988 Myanmar saw hundreds of thousands take to the streets across the country in a call for democracy, protests that came to a violent end the following month in an army crackdown that killed more than 3,000.

The demonstrations also heralded the rise to prominence of Aung San Suu Kyi and her National League for Democracy (NLD) opposition party.

Suu Kyi, who was then living in London, returned to Rangoon in 1988 to nurse her sick mother but quickly adopted a leading role in the democracy movement, delivering speeches to the masses at the city's Shwedagon Pagoda.

There has been huge speculation over whether members of the 88 Generation will stand for elections for the NLD in November 8 polls, which are seen as a key test of Myanmar's transition to democracy after decades of junta rule.

But almost all of those who had expressed an interest in contesting for the party, including prominent 88 student leader Ko Ko Gyi, have been left off the NLD's recently-released list of candidates.

The 27th anniversary of the student uprising comes as Myanmar battles to reach the hundreds of thousands of people affected by mass flooding in recent weeks, a crisis that Ant Bwe Kyaw said had left memorial events subdued as people focus on relief efforts.