Carmakers get rolling in the Philippines
World

Carmakers get rolling in the Philippines

Incentives tempt Toyota and others to lift output in a booming market, but infrastructure shortcomings remain a challenge.

A worker is reflected next to the emblem of a Toyota Vios at the Toyota Philippines manufacturing plant in Sta Rosa in Laguna, south of Manila. (Reuters photo)

In Manila, Toyota cars are part of a new wave of taxis. Thanks to ride-sharing services, the Japanese automaker's compact and affordable vehicles are becoming synonymous with private transport.

And there might be more on the way. Toyota Motor Philippines Corp (TMP) recently said it was thinking of applying for a special incentive programme to produce the Vios sedan domestically. The Japanese giant's participation could kick-start the creation of badly needed manufacturing jobs; the unemployment rate in the Philippines is high for Southeast Asia at 6.6%, despite a fairly healthy economy, according to the Asian Development Bank (ADB).

Under the administration of President Benigno Aquino Jr, the Comprehensive Automotive Resurgence Strategy (CARS) offers automakers tax incentives if they register to produce at least 200,000 units of one vehicle model over the next six years. Each producer enrolled in the programme will be entitled to a maximum of US$554 million.

"If they stick to 200,000, the Innova (multi-purpose vehicle) looks very difficult [to produce]. But with the Vios, we have potential. So probably we're planning to apply with our Vios," TMP president Michinobu Sugatawas was quoted as saying in the Philippine Star.

Toyota dominates the Philippine automobile market with a 43% share in 2014. The Japanese automaker is poised to become the first producer in the country to reach the one million cumulative sales mark this year, with the Revo and Innova being the hottest sellers.

But the Philippines has long trailed the vehicle manufacturing hubs of Thailand and Indonesia. Only 300,000 cars at most will be produced in the Philippines this year, compared to an estimated 2 million in Thailand. Moreover, the archipelago suffers from the highest electricity costs in the region and other serious infrastructure shortcomings -- from congested bridges and roadways to clogged ports and airport terminals.

Why, automakers must ask, should we invest in the Philippines?

"If you look at the Asean car industry, our participation is really about complementation," said Cris Frianeza, secretary-general of the Philippine Chamber of Commerce and Industry. "We have been making transmissions already."

Indeed, the Philippines is a well-established hub for electronic components, which represent an important part of the supply chain for many global manufacturers. The largest job producer in the sector is the semiconductor industry, fuelled mostly by Japanese investment as well. Toshiba and Panasonic both have factories in the country.

The Philippines is also an appealing market for production diversification strategies. After shuttering its factory in Detroit, Mistsubishi Motors is planning to start production in the Philippines later this year in a factory purchased from Ford Motor Co.

The new base would be a Southeast Asian production hub for Mitsubishi, with factories in Thailand, Indonesia and, soon, the Philippines.

Mitsubishi is establishing a presence despite what many investors see as an unfavourable legal environment. Japanese companies have spent millions in Philippine production despite the 60:40 local-to-foreign ownership rule, which prevents majority foreign ownership of investment in land and business -- and bars ownership altogether in certain industries, including mining and the media. 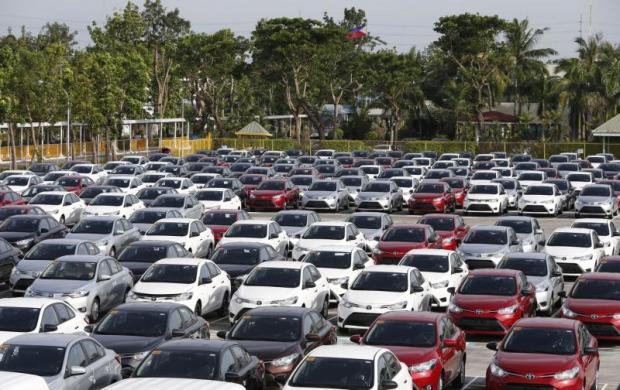 Yet, the precedent that has been set is indicative of Toyota's future. The company already has invested in training workers, one of the Philippines' most competitive assets.

"The Philippines' advantage is our English-speaking and highly trainable manpower," said Frianeza.

"Toyota has recognised this advantage and has set up a Toyota school to train mechanics that are then exported to other factories. Based on these high standards, some of those in the first batch of trainees have been sent to Toyota factories in Australia."

Through the TMC School of Technology, located south of Manila in Laguna, Toyota offers a two-year automotive services course.

If manufacturers were to invest on a bigger scale in the Philippines, there would be no better time than now. President Aquino is on a tear, targeting 6.8% GDP growth this year, making his country the fastest growing economy in Asean. Hitting that target would make him the most economically successful president the Philippines has seen in 60 years.

In a final push to solidify this legacy, the president Filipinos fondly call "PNoy" -- a term akin to "Filipino" -- has pushed to pass a massive $8.4-billion budget to continue building new infrastructure and maintaining neglected facilities.

Aquino's term has been defined by large-scale investment, improved perceptions of governance, and the emergence of a middle class. Consumer activity in the Philippines rose by 6% in 2014, while Thailand's consumption contracted. In the automotive sector alone, sales rose 21% in the first half of 2015.

In such an environment, a rising tide lifts all boats.

"Our automotive industry is riding with the other industries' growth. Micro SMEs and SMEs are expanding which has made for the robust demand for AUVs (action utility vehicles) and SUVs and light commercial vehicles," Rommel Gutierrez, president of the Chamber of Automotive Manufactures of the Philippines, told the Philippine Star.

Manufacturing, dubbed the "missing leg of the economy", has been booming, growing 8% in 2014. Activity has been helped by a Philippine Economic Zone Authority programme that offers discounted electricity rates for investors in manufacturing.

The Philippines, nonetheless, remains at a rock bottom compared with its regional rivals, and the high growth rates are from a low base.

In the end, even the automotive industry cannot flourish in isolation. President Aquino -- or his successor who will be elected next year -- will need to amend the currently prohibitive FDI law to attract more infrastructure investment. The Philippines receives the least foreign direct investment of the top five Asean economies, and it shows.