JAKARTA - Indonesian police fired tear gas at a crowd hurling stones and Molotov cocktails in the capital Jakarta Thursday, as security forces moved in to evict people from a slum and demolish their houses. 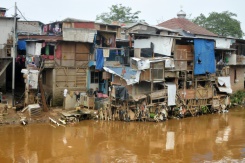 Shanty houses are seen a long the river at downtown Jakarta, on Aug 29, 2014.

Twelve people were injured and 27 arrested during the violent clashes in Kampung Pulo, a densely populated area on the banks of a river, which also saw an excavator set on fire.

Hundreds of residents were resisting efforts by police in riot gear to evict them from their homes in an area that suffers serious flooding every year during the rainy season, and move them to newer apartment blocks.

"These people demanded to be compensated but we did not give it to them," Kukuh Hadi Santoso, Jakarta's chief public order officer, told AFP.

He said they did not have certificates proving ownership of their homes, so authorities would not compensate them. Public order officers, who assist police in maintaining peace but have fewer powers, were called in to help in the operation.

Disputes over land occur frequently in Indonesia when authorities or businesses seek to clear areas for new projects.

Ownership is often unclear in the archipelago where land is sometimes passed down from generation to generation without any documentation to prove who is the owner.

Santoso said 972 houses would be knocked down as the area is frequently hit by floods and that he hoped the demolition would be complete by the end of Friday.

Calm had returned to the area in the afternoon but some police officers were still standing guard.