ANKARA - Turkey's election board on Thursday proposed holding snap legislative polls on November 1, adding to tensions amid a grave security crisis and sending the Turkish lira to a new historic low. 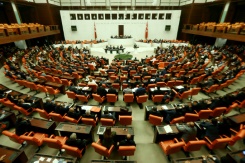 The date for the polls is considerably sooner than most commentators had expected after efforts to form a coalition ended in failure following inconclusive June 7 polls.

The proposal, which was presented to political parties before a final decision is made, comes three days ahead of an August 23 deadline for forming a new government.

The Higher Election Board (YSK) will determine an exact date for elections after the parties give their opinion.

Prime Minister Ahmet Davutoglu's ruling Justice and Development Party (AKP) lost its overall majority in the June election for the first time since it came to power in 2002.

Davutoglu formally told President Recep Tayyip Erdogan this week that he had failed to form a coalition government.

Under the constitution, Erdogan should now be obliged to give a mandate to the second-placed Republican People's Party (CHP) to form a new government.

But the president indicated Wednesday he would not do so.

If Erdogan invokes his right to call the election himself, an interim "election government" will be in charge until the polls -- to be made up of all four parties in the parliament.

But the CHP and third-placed Nationalist Movement Party (MHP) have announced they will not take part in a short-term government.

Investors have been rattled by the prospect of early elections and political uncertainty as well as spiralling violence between Turkish security forces and Kurdish militants, smashing a 2013 ceasefire.

Turkey's embattled lira on Thursday hit a new historic low in value against the US dollar, breaking the ceiling of three lira to the dollar for the first time.

The currency hit 3.0031 lira to the dollar in early morning trade, according to Bloomberg, before rallying very slightly to 2.99 to the greenback -- a loss in value of 2.25 percent on the day so far.

The Turkish currency has now declined 10.65 percent against the dollar over the last month, and 27.88 percent since the start of the year.

Erdogan said Wednesday that Turkey was swiftly heading to a new election, adding that the only solution in the current political deadlock was turning to the "will of the nation".

Turkish war planes launched new air strikes against Kurdistan Workers' Party (PKK) militants late Wednesday after eight soldiers were killed in the southeast in the deadliest attack of the current crisis so far.

The hard-right MHP, which came third in the polls, called for an extraordinary meeting of the MGK, for martial law to be imposed in areas of the mostly Kurdish southeast hit by the violence, and for elections to be postponed.

"Otherwise we could be faced with an inevitable, bloody civil war," its leader Devlet Bahceli said in a statement. "Turkey is slipping away from our hands."

Turkish authorities meanwhile launched dawn raids in Istanbul and the southern city of Mersin to arrest 40 suspected members of an ultra-left group, a day after two of its militants attacked the Dolmabahce Palace in Istanbul.

The Marxist Revolutionary People's Liberation Party Front (DHKP-C) claimed the attack on the palace which caused no fatalities but added to jitters about security in the city.