Thailand to return 14 orangutans to Indonesia

The Department of National Parks, Wildlife and Plant Conservation will return 14 orangutans to Indonesia next month. 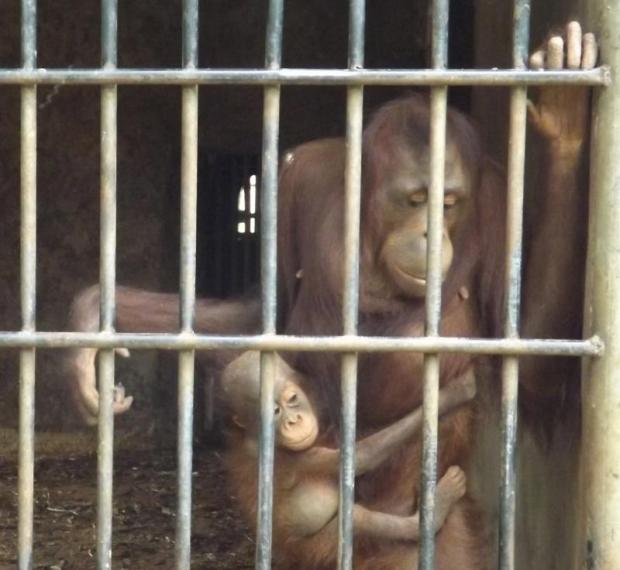 A young orangutan clings to a parent at the Khao Pra Thab Chang wildlife breeding centre in Ratchaburi province. One of 13 orangutans impounded in 2010 gave birth to a baby while at the centre. Saichon Srinuanjan

The primates have been under the care of the department for five years since they were discovered in Phuket.

Indonesia has agreed to pay the transportation costs. A C-130 Hercules transport aircraft will fly to Thailand to pick up the orangutans on Sept 7.

Under the Convention on International Trade in Endangered Species of Wild Fauna and Flora (Cites) regulations, countries which take care of protected animals on Cites's protected list have the right to demand compensation from the animals' country of origin to cover the cost of feeding them.

The department has demanded three million baht in compensation from Indonesia for looking after the 14 primates.

After Indonesia asked Thailand to waive the compensation, the department agreed to the request, Mr Adisorn said.

In 2010, the department was left in possession of 13 orangutans which were smuggled into the country and believed to be destined for a private zoo. The animals were found left in cages by a roadside in Phuket. The department filed a complaint with police, but there has been no progress in tracking down the smugglers.

The 13 orangutans were later taken to Khao Pra Thab Chang wildlife breeding centre in Ratchaburi province. Since then, one baby orangutan has been born.

"Soon after they arrived at the centre, we informed the Indonesian government they were here, but Indonesia initially refused to accept them. So it was our duty to take care of them," Mr Adisorn said.

The blood samples will be sent to the National Institute of Animal Health and Mahidol University's Faculty of Veterinary Science.

Kasemsun Chinnavaso, permanent secretary of the Natural Resources and Environment Ministry, said the ministry would amend the 1992 Preserved and Protected Wildlife Law to address the issue of the ministry having to take care of confiscated or non-native wildlife.

Under the current law, the authorities must take care of these animals for at least five years. The amended version will allow officials to return the animals back to their country of origin almost immediately, he said.

Can the US and Russia find a diplomatic 'off-ramp' on Ukraine?