JAKARTA - Indonesian police have arrested a man suspected of robbing and strangling a Japanese woman to death in her apartment in Jakarta. 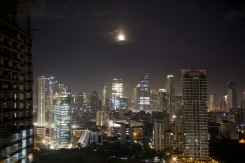 Indonesian police have arrested a man suspected of robbing and strangling a Japanese woman to death in her apartment in Jakarta.

The woman identified as Yoshimi Nishimura, 28, was found dead with strangulation marks on her neck at Casa Grande apartment building in south Jakarta on Monday, the capital's police chief Tito Karnavian told reporters.

"There was definitely resistance, but the victim was later strangled and beaten to death," he said.

Police arrested the apartment building's security guard, Mursalim, 25, who like many Indonesians goes by one name, and who had fled to Sumatra.

According to a police statement released on Friday, the suspect had jammed the lock of the door to Nishimura's apartment by stuffing it with paper and then demanded she hand over her belongings after he helped her to open the door.

"His main motive was to take the victim's belongings," Karnavian alleged, adding that the items seized included money and mobile phones.

"He observed that the woman was living alone which made it easier to rob her," he added.

Mursalim could face the death penalty if found guilty of premeditated murder.

An Indonesian court in 2010 sentenced a man to 10 years in prison as an accessory to the murder of a female Japanese tourist on the resort island of Bali.

In 2009, an Indonesian man was jailed for 20 years for murdering another Japanese tourist, Rika Sano, after kidnapping her in Bali.