'Third wave' of Thai investment now under way with businesses planning for the long term as the economy matures and Thai-Cambodian relations improve.

As Thai companies start to see their sales tapering off amid slow domestic consumption, some are reaping the benefits of earlier decisions to enter markets where the risks at times have spooked other investors aware of their chequered history.

Cambodia is one such promising market, as political relations with Thailand improve and memories of destructive anti-Thai riots of 12 years ago recede.

With more than 15 million people, including a growing number of middle-class consumers, Cambodia has been on the lookout for new investments. Because Cambodians in general consider Thai products to be premium goods, investments by Thai businesses are likely to pay off, says Nuttavudh Photisaro, the Thai ambassador to Cambodia.

Thai businesses that were the targets of anti-Thai sentiment in 2003 have returned, and others that had put off decisions have now made commitments to invest in Cambodia. Signs of their presence can be seen in sectors ranging from industry and agribusiness to restaurants, hotels and even home decoration.

"The past problems are an issue of the past and there is lots of potential in many areas for Thai investors," Mr Nuttavudh said in a talk with Asia Focus.

The events of 2003 were triggered by a totally fabricated report in Khmer-language media in which a Thai actress was quoted as saying that the Angkor temples belonged to Thailand. The report whipped up anti-Thai passions among rioters who damaged the embassy and properties of many Thai businesses. The Phnom Penh government offered a prompt apology as well as compensation, but the wounds still took a while to heal.

Today Thai investors are flocking back to the country, lured by strong growth, a stable political environment and open policies. 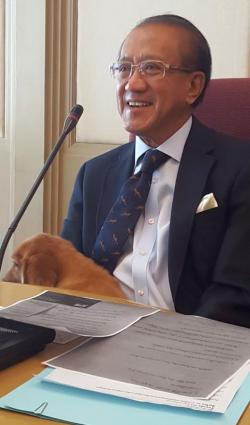 Thai companies such as CP Group, Siam Cement, Bangkok Dusit Medical Services (the operator of Bangkok Hospital and other chains), Samart Corp and host of hotels and restaurants have established their presence in the country.

Mr Nuttavudh sees the latest wave of foreign investment in Cambodia as the strongest yet.

"There have been three waves. The first was in 1993 when the market first opened up," he said, although many of those pioneers have disappeared. Rule of law was still non-existent, concessions were cancelled arbitrarily, or the businesses simply went belly-up because the market was too small to support them.

The second wave took place in 1997 when more businesses came and banks joined the fray. Among the latter, only Siam Commercial Bank has a significant operation in Cambodia, although Bangkok Bank and others are now ramping up their presence.

Then came the riots of 2003 and nervous Thai business operators either closed up shop or cancelled plans to enter Cambodia.

"There were many hotel businesses that sold out," said Mr Nuttavudh, who is on his third posting in Cambodia.

Only in the last four or five years have Thai businessmen regained confidence and began to return to Cambodia, he said.

"I think they (Cambodians) felt remorse for the actions and this was not purely emotional, but at times it was some businesses that were feeling threatened by the rise of Thai business," he added.

Today the two countries are entering a new chapter in their relationship. For one thing, the decades-long dispute over the Preah Vihear temple complex has been resolved to some degree by the International Court of Justice. Both parties have accepted the court's ruling and heeded its advice that remaining details related to border demarcation should be negotiated in a spirit of goodwill.

The current military government led by Prime Minister Prayut Chan-o-cha has signalled its desire to move the relationship forward, and there have been frequent visits by high-ranking officials including Gen Prayut himself in October last year.

Thai businesses are being welcomed back, and so are Thai soap operas which were at one time banned. Thai television stations are very popular among Cambodian viewers and this helps promote Thai products as well.

Investor-friendly rules help make the country a good destination, especially for those looking to tap a cheaper labour force.

The potential for future growth has prompted many to look at setting up special economic zones (SEZ), including the Thai industrial estate developer Amata Corp Plc.

Among those gearing up to tap the next wave of Thai-based companies is Phnom Penh SEZ, a Cambodian-Japanese joint venture that expects to draw more labour-intensive businesses from Thailand.

Thailand-based businesses such as Betagro, Minebea and SVI Plc have already committed their resources to investing in special economic zones. The growing interest has encouraged Phnom Penh SEZ to consider opening a new site near Poipet, across from the Thai border town of Aranyaprathet.

"Our target is to look at Thailand-based companies that are looking at shifting their base to a lower-cost producing country, yet not too far from the market they serve," said Michelle Zhao, an executive with Phnom Penh SEZ. 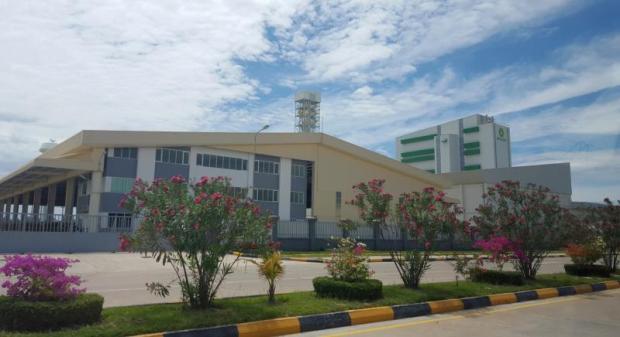 Betagro, one of Thailand's largest agribusiness groups, is among the companies that have established a presence in the Phnom Penh SEZ.

Companies have been shifting their production bases out of Thailand amid rising labour costs, although the drawback in Cambodia has been infrastructure, something that a fully serviced SEZ can help to address.

"Being next to Thailand in the Poipet area would give companies the best of both worlds as they would be able to get cheaper labour yet be connected to Thailand and the ports that are used to export their products," she added.

Exporting is one option for businesses, but the rising affluence of Cambodians also means that domestic demand among the country's 15 million people is likely to rise in the years ahead.

Cambodia, which has seen its gross domestic product (GDP) rise over the past few years by more than 7% annually, is expected to continue to grow at a similar level in the years to come.

"You may be surprised to learn this but about 40% of the country's imported goods are from Thailand with the concentration being consumer goods, although its exports are focused on the US and Europe," said Mr Nuttavudh.

Exports to the United States and Europe benefit from low tariffs under the Generalized System of Preferences (GSP), which is intended to help the world's less developed economies. Thailand in recent years has lost GSP privileges for many goods as it is deemed to have advanced to middle-income status. As a result Thai producers of certain types of goods are looking for lower-cost countries to manufacture their products and secure tariff breaks.

The Cambodian government also offers foreign companies a freer hand in ownership with limitations that are far less restrictive than in Thailand or other countries.

Property ownership such as condominiums is allowed, with land leases that are long enough -- 99 years -- to make the investments viable, although buying of land by foreigners is restricted.

These incentives, coupled with the openness of Cambodians in general to foreign investment, have resulted in some leading companies, among them Siam Cement and Thai Beverage Plc, establishing large operations in the neighbouring country.

Siam Cement has invested more than 10 billion baht to date in its cement plants as it taps the booming construction sector of Cambodia, which is showing no signs of abating.

"Although it may look as though there is a bubble in the Cambodian property market, I don't think that it has reached that stage yet," said Mr Nuttavudh.

As a result, he said, there remains more opportunity for Thai producers of related goods including ceramics, furniture and home decorations to expand sales in the country.

"There is a lot of potential in many areas, be it human resources, hospitality, healthcare, design or construction. We are strong in all these areas and surely we can help our Cambodian counterparts," the ambassador added.

Investors interested in tapping the Cambodian market can participate in a seminar entitled "Logistics: Cambodia's New Growth Engine", to be held in Phnom Penh on Oct 8 and organised by Post Publishing Plc. For information and registration, tel 02-616-4441.

The Commerce Ministry’s Internal Trade Department is scheduled to post the prices of 300 medical services on the department’s website later this month so consumers can view them before deciding to receive the services.