ASTANA (KAZAKHSTAN) - Kazakhstan is rolling out colourful pageantry to celebrate 550 years of statehood, defying an economic downturn that has battered a country viewed as a post-Soviet success story. 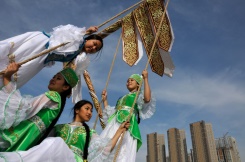 Women in traditional costumes playing on a swing during celebrations marking the 550th anniversary of Kazakh statehood in central Astana on September 11, 2015

In scenes recalling its distant nomadic past, men wearing fur hats and cradling eagles were out in the capital Astana this weekend as female dancers decked in light blue frocks and pointed hats danced to traditional music.

President Nursultan Nazarbayev, the 75-year-old strongman of this Central Asian country who is known for his grandiose nation-building projects, has named 2015 "the 550th anniversary of the Kazakh Khanate".

The grand celebrations, which run into October, come after Russian President Vladimir Putin angered many Kazakhs by saying the country never enjoyed statehood before its independence from the former Soviet Union.

"The Kazakhs never had statehood -- he created it," Putin said last year, referring to Nazabayev.

The anniversary links modern day Kazakhstan to a nomadic warrior state that existed on the territory into the 18th century.

Nazarbayev on Saturday hailed the anniversary and the celebrations as "a national achievement".

Yet economic pain -- largely due to the ruble's plunge in neighbouring Russia and low oil prices -- has dampened the celebratory mood.

"Some people think this search for a national idea to mobilise people around is a waste of precious budget money," said Dosym Satpayev, director of the Kazakhstan Risks Assessment Group, a think tank.

According to the Ministry of Finance, the 550th anniversary of the khanate and other nationwide celebrations this year will cost around $20 million.

Kazakhstan has seen its revenues diminish significantly as crude oil prices fell below $50 per barrel.

The International Monetary Fund predicts growth will remain sluggish at around two percent in 2015.

Deepening economic stagnation -- demonstrated by the government's recent decision to lift controls on fuel prices -- has been a rare test of legitimacy for Nazarbayev.

Last week, Nazarbayev said Kazakhstanis could learn to live "without foie gras" and "huge Land Cruisers" in remarks which unleashed a storm of comment online.

"You've never even tried foie gras and they go and ban you from eating it," wrote one Twitter user.

Nazarbayev's spokesman said his remarks had given Kazakhstanis an opportunity "to let off steam".

Last month, the tenge, Kazakhstan's national currency, plummeted over 25 percent in value after the central bank shifted towards a free exchange rate against the dollar.

While Kazakhstan's leadership continues to blame trends in the global economy and that of Russia, analysts say it could have done more to protect the economy during times of plenty.

Following the sudden downgrading of the national currency "public trust in government has declined", he says.

Shortly after Nazarbayev won a one-sided presidential election in April, with 97.7 per cent of the vote, the government drew up a 100-step blueprint for political and economic reform.

The reform envisages overhauling the country's weak political institutions, as well as the police and judiciary, and shifting the economy away from its dependence on oil.

But Melikishvili expressed scepticism over the planned reform, pointing to Nazarbayev's advanced age and his "prioritising of personal political power".

"The reform's ambitious nature and limited timeframe raise questions about its feasibility," he told AFP.

Some in Astana, however, were putting pessimism aside for the weekend.

"We never used to celebrate this holiday. Now we can, thanks to our president," said Janybek, a 43-year-old sporting a waistcoat emblazoned with traditional nomadic patterns and carrying a Kazakh stringed instrument called a dombra.

"We have our ancestry, our history and our land. What more could you ask for?" he said.

The statehood celebrations will peak in October in the southern city of Taraz where the government says the Kazakh Khanate was first declared in 1465.