PHNOM PENH - Guards at a Khmer Rouge death camp held competitions to see how many prisoners they could murder in an hour, a court heard Monday, the latest harrowing testimony at the trial of two top regime leaders. 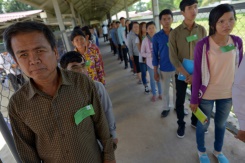 Cambodians queue up to attend a court hearing for the former Khmer Rouge leaders in Phnom Penh on July 2, 2015

"Brother Number Two" Nuon Chea, 89, and ex-head of state Khieu Samphan, 84, are on trial at a UN-backed court in Cambodia for the killing of ethnic Vietnamese and Muslim minorities, and for the regime's use of forced marriage and rape.

The pair have already been jailed at a previous trial for their pivotal role in a regime responsible for the death of up to two million Cambodians from 1975-1979.

Their first trial focused on the forced evacuation of Cambodians from Phnom Penh into rural labour camps and murders at an execution site.

Throughout the Khmer Rouge's brief but brutal time in power an estimated 100,000 to 500,000 Cham Muslims and 20,000 Vietnamese were murdered by the regime.

Before these charges were filed, the mistreatment of the two minority groups was rarely discussed.

Witness Sen Srun, called to testify about the sufferings of Cambodia's Muslim minorities, told the court that thousands of people, including hundreds of Chams, were detained and murdered at Wat Au Trakuon, a pagoda which was turned into a detention centre by the Khmer Rouge.

Sen Srun recalled how security guards, some as young as 15, would race each other carrying out executions in a bid to gain promotion -- with one guard managing a murder rate of more than one a minute.

"Some of them were competing to kill more people per hour, and one reached a record of killing 70 people in an hour," the 66-year-old survivor recalled.

"They were actually competing among one another, and if they killed more, then they would be selected to be in charge a unit, for instance," he added.

The witness estimated that up to 20,000 were killed at Wat Au Trakuon in the northeastern province of Kampong Cham.

Sen Srun added that Cham and Khmer women were often stripped naked and raped before they were killed.

"It was widespread," Youk Chhang, director of the Documentation Center of Cambodia which researches the Khmer Rouge atrocities, told AFP.

Last week the court heard how Cham Muslims were forced to eat pork and banned from speaking their language while copies of the Koran were "collected from houses and burned" by Khmer Rouge cadres.

The Khmer Rouge dismantled modern society in Cambodia in their quest for an agrarian Marxist utopia.

Many key Khmer Rouge leaders have died without facing justice, including "Brother Number One" Pol Pot who died in 1998.

Her husband, former regime foreign minister Ieng Sary, died in 2013 aged 87, before a verdict was delivered in his trial.