No European country 'can be exempt' from taking in refugees: Hollande
World

No European country 'can be exempt' from taking in refugees: Hollande

TANGIERS (MOROCCO) - No European country can get out of taking in refugees who have the right to asylum, French President Francois Hollande said Saturday, amid a growing row over how to fairly distribute a massive influx of migrants across the continent. 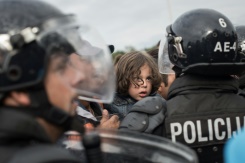 A young boy looks at a police officer as his family cross the Croatian-Slovenian border in Rigonce on September 20, 2015

The re-distribution "must involve all European countries -- no one can be exempt or we would no longer belong to the same union built on values and principles," Hollande said during a visit to Morocco, ahead of Wednesday's EU crisis summit on a contentious proposal to spread 120,000 refugees across member states.