UNITED NATIONS (UNITED STATES) - World leaders gathered at the United Nations on Friday adopted new global development goals for the next 15 years that aim to end poverty and improve lives. 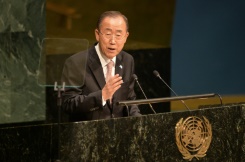 UN Secretary General Ban Ki-moon said the 17 goals and 169 targets to be achieved by 2030 laid out a "universal, integrated and transformative vision for the world."

Climate: Removing CO2 from the air no longer optional