UNITED NATIONS (UNITED STATES) - A stream of national pledges have put the planet closer but still a ways from a goal of keeping warming within the key danger threshold of two degrees Celsius (3.6 Fahrenheit), an analysis said Monday. 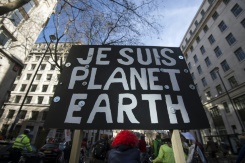 The planet is now on track for temperatures to rise 3.5 degrees (6.3 Fahrenheit) above pre-industrial levels, with a range of uncertainty between 2.1 and 4.6 Celsius, said analysis, produced with the Massachusetts Institute of Technology

The new projection came at the end of a week of climate events in New York that aim to build pressure for a year-end United Nations conference in Paris, where countries will seek a far-reaching agreement.

Climate Interactive, a Washington-based group whose analysis is used by leading governments, said that pre-Paris plans have put the planet one degree Celsius closer to meeting its target.

The planet is now on track for temperatures to rise 3.5 degrees (6.3 Fahrenheit) above pre-industrial levels, with a range of uncertainty between 2.1 and 4.6 Celsius, said the analysis, produced with the Massachusetts Institute of Technology.

The group had earlier projected a temperature rise of 4.5 degrees Celsius.

An increase of "3.5 (degrees) is absolutely too much and is not a world we want to be adapted to. It is actually a world we cannot adapt to," said Andrew Jones, co-director of Climate Interactive.

But he said that the world could still meet the two-degree goal if rich nations go ahead with plans to peak carbon emissions by 2020 and developing countries do so a decade later.

"We believe that a good chance at two degrees is still possible," Jones told AFP.

A UN summit in Copenhagen in 2009 set a goal of keeping the temperature rise within two degrees, a level that is still expected to cause growing droughts and disasters but which scientists consider comparatively manageable.

Some low-lying island states had pushed for a more ambitious goal of 1.5 degrees as rising sea levels put at risk their very survival.

Jones said that a "huge" factor in the new analysis was China, the world's largest carbon polluter, which in June pledged that its emissions would peak by 2030.

Other key actors include Mexico and Brazil, which in contrast to many emerging economies have promised absolute cuts in carbon emissions, not just a slowdown.

With an announcement at the United Nations on Sunday by Brazil, India is the only major country that has not submitted a climate plan.

But Jones doubted that the Indian plan would change calculations as New Delhi was expected to announce a reduction in carbon intensity in line with action the country was already on course to take.