Protesters call for the rejection of the Trans-Pacific Partnership trade deal under negotiation in Atlanta, Georgia on Thursday. (AFP photo)

ATLANTA, GEORGIA — A deal on an ambitious Pacific Rim free-trade area appeared within reach late Friday as negotiators kept pushing to resolve the remaining issues over drug patents and auto and dairy trade.

The arrival of senior US congressional aides at the hotel venue for the Trans-Pacific Partnership talks in Atlanta pointed to the possibility that top trade officials from 12 countries were close to agreement.

But their presence — and the fact that talks continued late into the night — underscored the stakes in the US-led effort to create the world's largest free-trade zone that would comprise 40% of the global economy.

Pressure was intense on negotiators, especially those from Australia, Canada, Japan, New Zealand and the United States, not to undercut important home businesses as they bargain over the last issues of the broad-ranging treaty.

Although the auto and dairy trade issues remained on the table, officials involved said the main barrier to a final deal is the length of intellectual property (IP) protection for biologics, a promising class of treatments derived from living materials.

The US is seeking longer protections than the five years common in many countries. 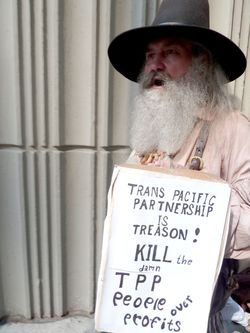 A demonstrator outside the Westin Peachtree Plaza Hotel in Atlanta, Georgia. — AFP photo

In the US, pharmaceutical companies get 12 years of IP protection before rivals can produce "biosimilar" copycat drugs that sell more cheaply. But in most countries, the US protections for drug developers are seen as far too long, and costly, for healthcare systems.

The issue has raised objections from civil society groups and government health programmes across many of the countries involved in the negotiations.

Rather than a problem of just cutting tariffs or other trade barriers, lengthening protections could in many places require changing well-established national laws and IP protection policies.

According to one source informed on the progress of the talks, strong resistance to Washington's stance was coming from Australia, Chile and Peru.

The talks between top trade officials in Atlanta have gone well past the original Thursday deadline and were headed into Saturday.

Trade ministers had entered this week's TPP negotiations under pressure to strike a final deal, after their talks in Hawaii two months ago failed.

They have already addressed many other issues, including some other industrial and agricultural trade areas, competition with state enterprises, digital economy protections and investment-dispute mechanisms.

But the details of many of those specific TPP chapters remain secret to the public, with the idea that negotiators will produce a complete, unalterable final document for their governments or legislatures to ratify on an up-or-down basis, with no room left to negotiate.

Still undecided in the TPP talks is how much Canada's dairy market will be opened to products from Australia and New Zealand, and how much the US auto market, which currently favours parts and cars built in Canada and Mexico, is opened up to Japanese parts and autos made in other countries.

That explained why Michigan congressman Sandy Levin, whose district includes major auto plants, and aides of Congressman Paul Ryan, of a dairy-heavy Wisconsin district, were in Atlanta, to ensure that the final deal is acceptable for Congress's ratification.

But similar pressure arose from Canada, where the trade treaty is an issue in the Oct 19 national elections.

The leader of the New Democratic Party, which until recently was leading the polls, declared that they would not feel bound to back the TPP treaty negotiated by the current Conservative government of Prime Minister Stephen Harper. 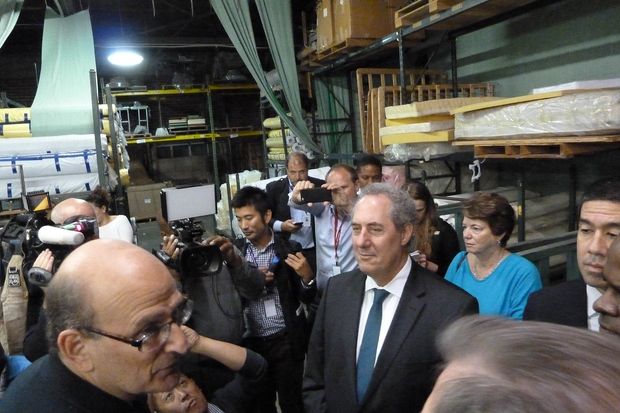 US Trade Representative Michael Froman (centre) takes a break from negotiations on the treaty to visit the Colgate mattress factory on Thursday. — AFP photo

Duterte gets tough on China, leaning back to old ally US

After years of shifting the Philippines closer to China, President Rodrigo Duterte appears to be leaning back toward the US.

MINSK: Belarusian President Alexander Lukashenko has been sworn in for a sixth term at a secret ceremony held with no prior announcement, the Belta state news agency reported Wednesday.