Haze is seen over Phuket on Monday. (Photo by Achadtaya Chuenniran)

Environmental officials said Monday that pollution levels from Indonesia had risen in the past 24 hours and authorities were opening hotlines to provide advice and handing out face masks.

The increased haze was most noticeable in both Hat Yai and Yala where particular matter was measured at 130 and 120 microgrammes per cu/m, respectively, on Sunday.

In Pattani, the pollution level stood at 121 microgrammes on Monday.

Dr Banjerd Sukpipatpanont, the province's health chief, said the situation likely would continue throughout the month with Indonesia unable to control its forest fires.

Authorities in Pattani warned local fishermen to take precautions and turn on lights as poor visibility at sea could cause accidents.

Children, old persons, and allergy, asthma, lung and heart patients were advised to stay indoors and the general public was encouraged to wear face masks. Health officials were distributing masks in affected areas.

In Kuala Lumpur, Malaysian Prime Minister Najib Razak today called on Indonesia to take action against people setting fires that have caused choking smoke to drift across the region. 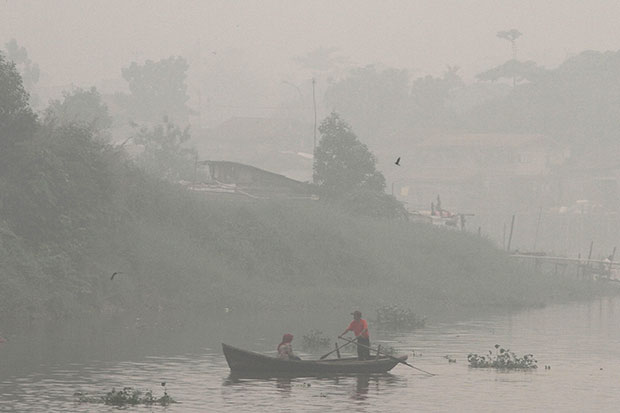 A man rows a boat on Siak River as thick haze from wildfires blanket the city in Pekanbaru, Riau province, Indonesia, Monday. The haze, which has shrouded parts of neighbouring Malaysia and Singapore for about a month, also spread to Thailand on Oct 5. (AP photo)

Indonesia has come under pressure in the past few weeks to contain the annual haze crisis, which is caused by slash-and-burn agriculture on Sumatra island and its part of Borneo island.

Companies seeking to clear land for palm oil and pulp wood plantations have been accused of encouraging the fires that often smoulder for weeks in underground peat deposits.

The problem has been exacerbated this year by the El Nino weather phenomenon which has brought unusually dry conditions.

"If this is done by people or by farming companies, Indonesia needs to take decisive action against the perpetrators," Mr Najib said on Twitter late on Sunday.

Schools in Malaysia and Singapore have closed when the smoke has been heavy, sports events have been cancelled and tourism operators are fretting. Health authorities across the region warn people to avoid exercise on bad days.

Indonesia says more than 200 companies, most of them from Southeast Asia, are being investigated on suspicion of causing fires.

Rental cars becoming scarce and expensive for US travelers