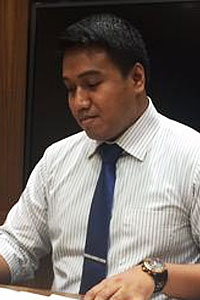 Although former prime minister Tony Abbott might have dented bilateral ties, persisting policies are the real icebergs that can potentially capsize neighbourly relations beyond repair.

Bilaterally, Operation Sovereign Borders -- an Australian military-led operation repeatedly carried out in Indonesian territorial waters -- remains the ultimate deal breaker for Jakarta due to its flagrant breach of the 2006 Lombok Treaty which clearly stipulates the "mutual respect and support of the sovereignty" of both parties.

Furthermore, Australia's use of its intelligence capabilities in paying human traffickers operating within Indonesian waters constitutes another open violation of the 2014 Joint Understanding on a Code of Conduct obviously instructing that both countries "will not use any of its intelligence, including surveillance capacities, or other resources, in ways that would harm the interests of the parties".

Corrupt Indonesian officials who individually turn a blind eye to people smugglers do exist, but their transgression is strikingly different in magnitude from what amounts to borderline "state-sponsored human trafficking" conducted as an official national policy carried out by Australia's military and intelligence services.

Regionally, aside from being a repeat offender in bilateral treaties, Canberra's violation of Indonesian sovereignty is also in contravention to the Treaty of Amity and Cooperation (TAC), a regional treaty serving as a precondition for Australia's membership in the East Asia Summit (EAS).

Internationally, Australia's asylum seeker pushbacks have been accompanied by the forced repatriation of refugees, questionable offshore detention facilities, and abusive confinement practices which have resulted in psychological harm and sexual abuse of asylum seeker children in an unprecedented scale -- a collection of cruel and inhumane practices where Australia, according to Amnesty International, has "spectacularly failed to protect and respect the human rights of the world's most vulnerable people".

Furthermore, significant policy shifts are unlikely because many previously serving under Mr Abbott, including Mr Turnbull himself, are simply being recycled in between key positions.

Under Mr Turnbull, the only important development for bilateral relations would be Australia's new defence white paper scheduled for 2015.

Lastly, Indonesia's own foreign policy engagements beyond Southeast Asia, especially in the Middle East, can potentially clash with Australia's. Indonesian President Joko Widodo's visit to Saudi Arabia, the United Arab Emirates and Qatar indicates Jakarta's seriousness in engaging with and establishing a beachhead in the region to secure Indonesian access to energy supplies, investment, trade, and to protect its migrant workers.

Many Indonesians view the outflow of refugees and battle-hardened veteran jihadists from the Middle East as "counter-flows" of Western military interventions and proxy wars that the rest of the world is forced to burden, often in disproportion to their economic abilities and individual actions.

Indonesia and Australia similarly face returning jihadists from Iraq despite the fact that Indonesia opposed the invasion of Iraq while Australia supported the war which later created an intractable conflict, an Iraqi refugee crisis, and a "vacuum of sovereignty".

While Europe faces a full-blown Syrian refugee crisis, Australia's commitment to take 12,000 refugees pales in comparison to the number of refugees accommodated by less privileged economies, like Jordan, Lebanon, Egypt, Turkey and even Greece.

Indonesia's foreign policy in the Middle East will present new opportunities as well as challenges for Indonesia-Australia cooperation.

Currently, Indonesia's "subtle" signalling of displeasure and Australian attempts to spin any remotely positive comments into euphoric signs of relations being "fully restored" and "back on track" are similarly unhelpful.

Indonesian Foreign Minister Retno Marsudi's clarification that Australia was twice removed from Indonesia's planned visa-free list because of its inability to reciprocate, interestingly, reveals a conditionality not imposed on any other country. Can Mr Turnbull read between the lines better than his predecessors?

In the near future, Indonesia-Australia relations will face a number of foreign policy minefields and "active volcanoes". In 2016, the next round of executions in Indonesia's war on drugs will take place with Australians still on the firing squad's waiting list.

Pierre Marthinus is executive director for the Marthinus Academy in Jakarta.

Pierre Marthinus is executive director for the Marthinus Academy in Jakarta.

Thailand's joint business group on Wednesday trimmed its 2021 economic growth forecast for the second time this year to 1.5-3.0% from 1.5-3.5% after a third wave of coronavirus infections, despite improved exports.

HONG KONG: China launched a large-scale experimental network in Beijing on Tuesday to test the future of internet technology over the next five to 10 years.

Thailand will seek to buy about 35 million more doses of Covid-19 vaccine from two or three other producers, in addition to the acquisition of 65 million doses already underway, Prime Minister Prayut Chan-o-cha said on his Facebook page on Wednesday.

Science without gravity aboard the International Space Station