CAIRO - Gunmen shot dead an Islamist candidate in Egypt's parliamentary elections in North Sinai on Saturday, officials said, where jihadists are waging an insurgency against the government. 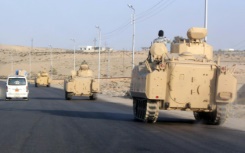 A convoy of Egyptian armoured vehicles heads along a road in El-Arish on the Sinai Peninsula on August 13, 2011

Mostafa Abdel Rahman, a candidate for ultraconservative Salafist Al-Nur party which is seen as pro-government, was gunned down by two assailants on a motorbike outside his home in the town of El-Arish, police officials said.

Nur was the only prominent Islamist party to emerge unscathed from a crackdown on Islamists following the military overthrow of Islamist president Mohamed Morsi in 2013, having supported his ouster by then army chief Abdel Fattah al-Sisi.

With Morsi's Muslim Brotherhood blacklisted, and thousands of its activists killed or detained, the Nur party remained as the main Islamist grouping contesting the parliamentary elections that began on October 18.

Sisi, who is now president, is contending with a fierce insurgency in the Sinai Peninsula by Islamic State group affiliated militants who have branded his government as apostate, and elections as a heretical practice.

Police officials say they believe jihadists targeted the candidate to undermine the elections.

Abdel Rahman, who also acted as the North Sinai secretary general for the party, would be the first politician killed by militants in the two-year insurgency since Morsi's overthrow.

Jihadists have focused most of their attacks on the military, police and judiciary.

On Saturday, the Islamic State group claimed credit for two roadside bombings in El-Arish over the past 48 hours that killed four policemen.

It also said it had planted a bomb at a Cairo intersection flanked by hotels near the pyramids, which wounded four people when police tried to defuse it on Friday.

The attacks came despite a massive army operation to quell the insurgency in the peninsula bordering Israel and the Gaza Strip, and which the army claimed in September had killed scores of jihadists.

Hundreds of policemen and soldiers had been killed in attacks since Morsi's overthrow, which unleashed a deadly crackdown on his supporters in which hundreds of protesters have been killed.

Egypt had tightened security for the multi-stage election, which runs from October 18 to December 2.

The election was part of a promised transition to democracy by Sisi after he overthrew Morsi, the country's first freely elected leader whose divisive year in power prompted massive rallies demanding his resignation.

The poll comes following a constitutional referendum and the 2014 presidential elections that Sisi won.

Turnout in the first round on October 18 was relatively low, with only 26.6 percent of registered voters casting ballots, according to an electoral commission official.

That was a sharp drop from the 62 percent registered in the first stage of the last parliamentary poll, held in 2011 months after the ouster of longtime president Hosni Mubarak.

Morsi's Muslim Brotherhood won most seats, followed by the Nur party, creating an Islamist-dominated parliament eventually disbanded by a court order in 2012.

Observers say the outcome of this election is a foregone conclusion and expect the 596-member parliament to firmly represent Sisi's policies in the absence of any opposition.

China FM calls on Russia, Ukraine not to let war 'spill over'