Siam Makro Plc, the operator of Makro cash-and-carry stores under Charoen Pokphan Group, is keen to expand its retail business in Myanmar in the near future.

"We have conducted a feasibility study on Makro's market opportunities in many Asean countries, with Myanmar, Vietnam and Indonesia being the priority destinations," she said.

Siam Makro is studying Myanmar consumer behaviour and foreign investment laws. If the regulations are clear, it is ready to open its first store immediately. 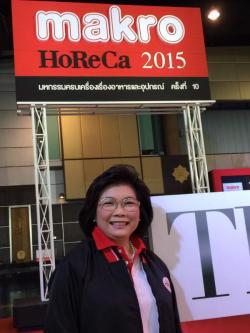 Suchada: Myanmar, Vietnam and Indonesia are priority targets for Makro

According to an executive of ABC Group, operator of Myanmar's second-largest convenience store chain, so far the Myanmar government has not allowed foreign retailers to invest in the country by themselves.

Foreigners will be allowed to invest in supermarkets and hypermarkets next year but will have to form joint ventures with Myanmar companies.

"The retail landscape in Myanmar will drastically change and new retail plazas will be gradually opened in the near future," said Wichai Kanrahong, a counsellor at the Thai embassy in Yangon.

About 80% of products are imported from countries including Thailand.

"With the connected border and many Myanmar workers in Thailand, Myanmar people are quite familiar with Thai brands," Mr Wichai said.

"The boom of tourism in Myanmar is also an opportunity for Makro," she said.

Makro has already opened branches in border towns near Myanmar.

It has also conducted a feasibility study to expand into Indonesia and Vietnam, which have big populations. Laos and Cambodia are seen as second-tier countries.

Mrs Suchada said the company would keep investing in Thailand by opening two stores in Phrae and Trat by year-end. Each will need an investment of 300 million baht.

"Though the economy is not good, we are satisfied with our performance in the first nine months," she said.