NICOSIA - An Australian archaeological team in Cyprus has uncovered a theatre dating from 300 BC, the oldest structure of its kind yet unearthed on the Mediterranean island, the antiquities department said Friday. 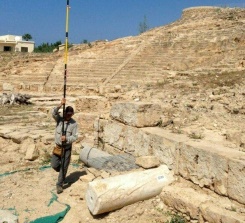 A member of an Australian archaeological team, conducting a pole photograph survey in Nea Paphos, on Cyprus' southwestern coast, at the site of an uncovered Hellenistic-Roman theatre dating from 300 BC on Sept 17, 2015.

"The Australian team has uncovered the oldest theatre in Cyprus: a structure that was used as a venue for performance and spectacle for over six-and-a-half centuries from c. 300 BC until its final destruction in the earthquakes of AD 365," said the statement.

"More recent excavations have attempted to position the theatre within its ancient urban context, by understanding the surrounding ancient structures including a second century AD nymphaeum (water fountain)," it added.

Excavations at the site of the Hellenistic-Roman theatre of Nea Paphos, on Cyprus' southwestern coast, were conducted by the Australian Archaeological Mission from the University of Sydney.

The Australian team has been excavating at the UNESCO World Heritage site for two decades.

In September the team conducted a geo-mapping survey of the ruins of the town's Roman colonnades.

Excavations immediately to the south of the theatre revealed a Roman paved road, approximately 8.4 metres (28 feet) wide, which was the main traffic thoroughfare to access the theatre, the antiquities department said.

"The existence of this road also confirms that ancient Nea Paphos was laid out on a typical Hellenistic grid plan. The discovery of numerous fragments of granite columns on the theatre site (over 30 to date) confirms the importance of the paved road," said the statement.

The columns are made from granite from quarries in Troad in Turkey and reflect Roman trade in monumental architectural elements.

"Troad granite columns are known from colonnades across the Mediterranean. As the capital city of Cyprus at the time, it is not surprising that Nea Paphos would be adorned with this architectural demonstration of Roman civic order."

The ancient theatre was recorded for the first time using pole photography and photogrammetric programs which stitched together over 2,000 individual high resolution photos.