PARIS - The Eiffel Tower will be closed indefinitely following the wave of deadly attacks in Paris, the iconic landmark's operator said on Saturday. 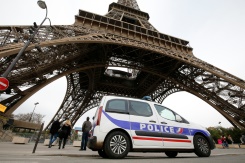 The Eiffel Tower was opened in 1889 and is France's most popular tourist attraction with up to 20,000 daily visitors

The company decided to close the monument -- normally visited by up to 20,000 people a day -- after Friday's attacks which claimed at least 128 lives, a spokeswoman told AFP. It will remain closed "until further notice," she added.