LOS ANGELES - Climate change may be the challenge of our time, but when it comes to rallying the global public to the cause, a Hollywood star will always trump a treaty or summit. 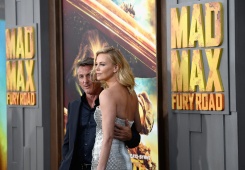 Environmental threats loom large in many an American blockbuster, as in this year's "Mad Max" about the fight for access to water, or "Interstellar," featuring a group of astronauts who leave an Earth made uninhabitable by plagues and sandstorms to seek a new planet.

A star-studded documentary series called "Years of Living Dangerously," co-produced by James Cameron, tackles climate change and the melting of the polar ice caps head-on, with a second season slated for next year.

But for much of the glitterati, the battle is fought off screen, calling for action on social media, demonstrating in the street or lending their faces to ad campaigns.

Tinseltown's unofficial chief ambassador on climate is Leonardo DiCaprio, who in 2014 was named a UN messenger of peace.

Last year he opened a summit on climate change at the United Nations with a stark warning: "None of it is hysteria. It is a fact."

"This is not a partisan debate. It is a human one. It is our moral obligation -- if, admittedly, a daunting one," added the star of "Titanic" and "The Wolf of Wall Street."

DiCaprio, who will attend the COP21 climate change talks in Paris next month, has been crusading on global warming since 1998, when he founded the Leonardo DiCaprio Foundation, which is involved in 78 projects and raised $40 million at its last event.

His 2007 documentary "The 11th Hour" blares his message loud and clear: deforestation and pollution are destroying the ecosystems that guarantee the survival of species.

DiCaprio is far from alone in the fight.

Matt Damon has led a high-profile campaign against deforestation and water pollution, while Robert Redford has lobbied against coal power and Harrison Ford has become a champion for biodiversity.

"Terminator" star Arnold Schwarzenegger took pioneering action in favor of the environment as governor of California, including pushing for less-polluting cars.

Star power has undeniably raised the profile of the campaign to save the planet, but how much impact does it really have on public attitudes?

The answer is quite a lot, according to Jon Christensen, a senior fellow at the UCLA Institute of the Environment and Sustainability.

Poor communication is one of the main problems when it comes to raising awareness of global warming, he said.

"The most effective messages about climate change are stories that people can relate to their own lives and show people that there are positive ways that they can take action," he said.

One good example was when Harrison Ford, Calista Flockhart and Cameron Diaz made environmentally friendly cars popular a decade ago by showing up at the Oscars in a Toyota hybrid car.

"That's a step in the right direction," added Christensen.

Brad Pitt has also tried to set an example by using environmentally sustainable materials to rebuild homes destroyed by Hurricane Katrina in 2005.

"You can look at it as discouraging" that organizations rely on famous people, said Maher Nasser, director of the Outreach Division, Department of Public Information of the UN.

"But it's reinforcing. It's reaching new audiences that hopefully become more engaged."

From script to reality?

Movies and television, in depicting worst-case environmental scenarios, also play a role in shaping public consciousness of the issues at stake.

"You can actually put the environment into so many types of stories," said the actress and producer Kristin Davis, of "Sex and the City" fame.

"The Day After Tomorrow" (2004) shows the world entering a new ice age because of global warming; in "Waterworld" (1995) polar ice caps melt, provoking a maritime crisis.

And Cameron's 2009 animation blockbuster "Avatar" -- whose plot dwells on energy problems on Earth in the year 2154 -- was a milestone in that respect.

Besides winning three Oscars, it became the biggest box office hit in history, with $2.8 billion in revenue.

Its director is also waging a personal -- and well-publicized -- campaign to reduce greenhouse gas emissions by removing meat and dairy products from his diet.

"Actors and celebrities have to take the opportunity to use the media to spread green ideas. It's a great way to teach people and encourage people," she said.