PARIS - Department stores half-empty when they should be packed and a Christmas market on the prestigious Champs-Elysees avenue where vendors outnumber the visitors -- the attacks on Paris are having a profound effect on retail business. 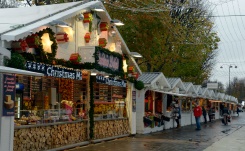 People walk past a food stand on the reopening day of the Paris Christmas market on the Avenue des Champs-Elysees in Paris on November 19, 2015

"It's deserted," said Marine at the cosmetics counter of Printemps, one of the department stores grouped together near the Opera Garnier which are normally overflowing with shoppers, particularly Chinese tourists.

The management says footfall is down 30 percent since last Friday when 130 people were killed as suicide attackers launched a shooting and bombing spree on the national stadium, bars and restaurants and, in the worst of the violence, a concert hall.

Security guards are posted at the entrance frisking visitors, who have also been checked with metal detectors for the past two days. The scene is replicated in other department stores and commercial complexes in the city.

"We are all prey," said Marine. "Everything is under surveillance. There are many policemen in plainclothes."

China, another saleswoman at a bathroom accessories counter, said her sales had plummeted since France's deadliest terror strikes.

A worker at a section selling top-end Italian mens' suits said although in lower numbers, Chinese shoppers still came in droves. "The Chinese aren't scared of anything!" he said.

The same deserted look haunts Paris's fashion street Avenue Montaigne, where top world couturiers are located, but the reason is different here, according to an employee at a leading leather store.

"The difference with the department stores is that it's not linked to security... People are saying that it's indecent to shop after such events," said Armelle.

The same story is repeated at the traditional Christmas village at one end of the Champs-Elysees comprising lines of small wooden chalets where a range of goods are sold -- from Christmas decorations to regional products, arts and crafts, wine and snacks.

It opened last Friday, just a few hours before the terror strikes and things have been going downhill since.

"We had good sales on Friday. Now it's catastrophic. Not even enough to pay the daily rent for the chalets," (600 euros), sighed Marlene, who is selling baking pans.

"One has the impression that people don't want to buy superfluous things," she said.

The owner of a wildly popular Brazilian eatery -- a regular feature at the Champs-Elysees Christmas market -- said customers were now less than a third of the daily average of 100 in past years.

Christmas lights on the iconic Paris avenue were lit on Thursday evening but unlike other years there is tight security with anti-riot police patrolling the area, located near the French presidency.

The fear is rubbing off on to salespeople too.

Marina, who works at an Italian shoe store on the posh Rue Honore, said: "I have stopped using the metro since Friday."

Philippe Sauvat, a 54-year-old diehard Christmas market visitor said he had never seen the Champs-Elysees so empty during the festive season.

"Last year I had to slalom through the crowds, this year there is nobody," he said.

Adline Falck at a stand near an ice skating rink echoes the sentiment. This is the sixth Christmas market here for the 21-year-old and she's never seen things look so bad.

"Five or six people came yesterday," she said, staring fixedly at the empty skating rink. "Normally that rink is full of skaters who then come to our stands but people are now scared that the Champs-Elysees will be attacked."

But Emilie Dumas said it was vital to put up a brave front.

"I have a kiosk nearby and nothing will make me quit," the 29-year-old said.

"Christmas is one of the most important festivals and living in fear is not a solution," she said defiantly.

WASHINGTON: A US judge has ordered Facebook to release posts the social network removed over their role in inciting government-backed violence against the Rohingya people in Myanmar.

Confusion over reopening timelines has spoiled the chance for the tourism industry to rebound during the upcoming high season.