NEW YORK - Ever since John F. Kennedy died from an assassin's bullet, the indelible image has been the silent Zapruder film of the president's doomed motorcade. 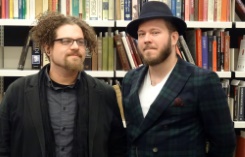 Composer David T. Little (L) and librettist Royce Vavrek, who wrote the opera "JFK, in the library of the National Opera Center in New York on November 18, 2015

But an upcoming opera is aiming to offer a fresh, little-discussed perspective -- just how did Kennedy spend the final day of his life?

The opera "JFK" looks at the hours before Kennedy's assassination in Dallas on November 22, 1963, particularly his night staying at the Hotel Texas in adjacent Fort Worth, as a window into his character as well as into the national hope that died with the young president.

Commissioned by the Fort Worth Opera for a premiere in April, "JFK" purposely stays away from depicting the assassination -- an ending that presumably everyone already knows.

"What is interesting to me is not so much the assassination itself or the conspiracy theories around it -- although those are certainly significant -- but our cultural interaction with his death and the very violent and public way that it happened," composer David T. Little told AFP.

"In Kennedy, we see our own death in his death, we project our fears, our anxieties and our hopes onto his mythology," added Little, who is working with librettist Royce Vavrek, a team that created the acclaimed 2012 experimental opera "Dog Days."

The impending assassination plays out in ways both large and small throughout "JFK," the first grand opera by Little and Vavrek.

Jackie Kennedy, played by mezzo-soprano Daniela Mack, in one scene asks if her famously dallying husband will "love me... every day for the rest of his life."

The music builds ominously and the opera closes with an aria in which Kennedy, portrayed by baritone Matthew Worth, reflects on his life and concludes, "I'm a lucky man."

"The assassination exists as a sort of celestial body that is imposing its gravitational pull on the events and the show," Little said.

While the plot unfolds over a matter of hours, "JFK" plays wildly with narrative form as characters from the past, present and future emerge, often seeming to be in dreams brought on by Kennedy's medical injections.

In parts of "JFK," the president seems to be the moon -- a nod to his ambitious space aspirations that the United States only achieved after his death.

The creators chose not to delve into the abundance of conspiracy theories around Kennedy's assassination, which were notably prominent in Oliver Stone's 1991 movie "JFK."

But Vavrek, the librettist, sees the opera's experimentation in form as a nod of sorts to the conspiracy-minded.

"It became more exciting to us to think of conspiracies on a cosmic level than in an Earth-bound conspiracy theory sort of way," he said.

Characters who appear in the opera include Nikita Khrushchev, the Soviet leader who formed a budding partnership with Kennedy after the Cuban missile crisis, and Lyndon Johnson, Kennedy's vice president and successor with whom he had a complicated relationship.

Johnson takes the stage in a cowboy outfit with a touch of twang in the music, offering comic relief but also a window into Kennedy's perceptions of Texas.

In one of the more intriguing devises, "JFK" brings in a pair of ordinary people in three stages of history.

Clara Harris and Henry Rathbone appear first as Fates from Greek mythology, in another foreshadowing of Kennedy's death.

In Texas, Clara returns as a hotel maid and Henry is an advance man for the Secret Service.

"JFK" is the most ambitious initiative for the Fort Worth Opera, which has increasingly become known for experimental and provocative work, including bringing the anti-death penalty "Dead Man Walking" to Texas, the US state that carries out the most executions.

In "JFK," general director Darren K. Woods said he saw a story with universal, thought-provoking themes, such as the "mask" that shields individuals from the world.

"'JFK' is no more about Fort Worth than 'Madame Butterfly' is about Nagasaki," he said.

The Opera de Montreal recently signed on as a co-commissioner of "JFK," with plans under way to bring it to Montreal, said Woods. New York's American Lyric Theater is also involved.

"In 200 years I want people to still be performing this," Woods said.