Pope readies for Africa, riskiest trip of his papacy
World

Pope readies for Africa, riskiest trip of his papacy

VATICAN CITY - Pope Francis heads to Africa this week for the riskiest trip of his papacy, defying danger with an open-topped popemobile and visits to a slum, refugee camp and mosque despite security fears following jihadist attacks. 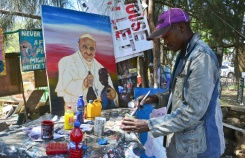 A street artist mixes paint as he works on a painting of Pope Francis in Nairobi, on November 20, 2015

The Argentine pontiff will urge efforts towards peace, social justice and conciliation between Islam and Christianity on his travels to Kenya, Uganda and the Central African Republic (CAR) during the five-day trip from Wednesday.

His bodyguards will be working overtime in a region riddled with jihadist violence and following a spate of deadly attacks from France to Turkey and Mali by gunmen claiming to be acting in the name of Islam.

The 78-year-old, a self-appointed defender of the downtrodden, will give 19 speeches on his 11th foreign trip, meeting with victims of war, child soldiers and AIDS sufferers, as well as those who live in extreme poverty.

The Vatican has warned the CAR part of the trip could be changed or cancelled entirely if security risks increase.

But Francis is keen for it to go ahead, particularly the planned opening on Sunday of a "Holy Door" in Bangui's cathedral 10 days before the start of the Jubilee Year, a period devoted by the Catholic Church to forgiveness and reconciliation.

"If he opens the Holy Door in Bangui, a Jubilee Year will begin for the first time ever in the periphery" rather than the Church's seat in the Vatican, Giulio Albanese, an African expert with Radio Vatican, told AFP.

"It would be the best summary of the pope's doctrinal attitude," of a humble Church dedicated to the poor, he said.

It may not happen: Vatican police warned Friday the schedule could change and sources say CAR's acting president Catherine Samba Panza could cut the visit to a few hours in Bangui airport under the watchful gaze of UN peacekeepers.

A visit to a camp for people displaced by the conflict, a stop to pray at a mosque in Bangui's notoriously dangerous PK5 neighbourhood and a mass in a sports stadium in the capital would be scrapped, disappointing thousands of pilgrims.

Before CAR, Francis will travel to Kenya and Uganda, where a respective 32 percent and 47 percent of the populations are Catholic, and where the threat of attacks by the Somali Islamist group al-Shabaab is ever present.

It will not be the first papal appearance in either country: the pope's globe-trotting predecessor John Paul II travelled to Kenya three times, while Uganda holds the honour of having been the first African country to be visited by a pope, with Paul VI going in 1964.

On his first visit, Francis is expected to slam inequality and corruption within all spheres of life, from politics to the Church.

The fight to tackle poverty will dominate both his trip to Kenya's vast Kangemi slum -- a multi-ethnic shanty town home to some 100,000 people -- and a Ugandan charity centre in Nalukolongo.

"The problem of social exclusion is serious in both countries. In Kenya, for example, 75 percent of the wealth is owned by one percent of the population," Albanese said.

With international climate change talks in Paris just around the corner, all eyes will be on the pontiff's speech in Nairobi to the UN's Environment Programme (UNEP) and Human Settlements Programme (UN-Habitat).

Francis is a fierce environmentalist and is unlikely to temper his words when discussing global warming and the exploitation of the Earth for profit, tightening the screws on the world's political leaders before crunch time at the talks, which begin on November 30.

In Uganda, he will honour Christian martyrs persecuted for religious, cultural, political or sexual motives, celebrating a mass to commemorate the first African saints -- 22 young men burned alive in 1886 by royal order because they refused to renounce their faith or become sexual slaves.