LA LLANADA (COLOMBIA) - Gold mining can be a dirty, bloody business, but a village in Colombia has been rewarded for an ethical model -- producing clean "green gold" which has seduced big international jewelers. 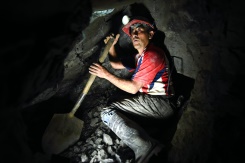 The gold ground out of the gray rocks of the Andes in La Llanada is worn by Hollywood stars at the Cannes Film Festival, in creations by Swiss jeweler Chopard.

The La Llanada operations were certified in October by Fairmined, an international body that certifies ethical mining practices. That opened the way for it to sell its gold to international companies.

"It is a sustainable model that benefits people as well as nature," said Diego Riascos, general manager of the Coodmilla village mining cooperative.

"If there is an international market that is much better for us, because the miners will be able to sell their gold at a better price."

The La Llanada mines have also been certified as an environmentally-friendly operation, which avoids using toxic chemicals such as cyanide and mercury.

"This is clean gold," Edison Rosero, 23, who works as foreman in one of the mines, run by his uncle Celimo.

Like numerous other locals, Edison rides up on a motorbike from the village to the mine. There they descend 100 yards under the rock to the seam to pick up the rocks loosened by explosives.

You would think getting the gold out of these mountains, through the dense green forest and away onto the necks and wrists of rich Europeans would be an ordeal.

The surrounding Narino mountains are a hotspot of violence in the decades-old armed conflict between rebels and the Colombian government.

Yet through a strongly community-based, small-scale production system, the locals here have avoided extortion and kidnappings by armed groups and competition from big firms.

The indigenous Abades people mined the gold here centuries ago before they were killed off in the 16th century. Canadian firms came in the 1930s but left when gold prices fell during World War II and never returned.

Ever since, the locals have kept control of the production and profits from the gold they painstakingly extract from the rocks, via the Coodmilla cooperative.

"Here there is no violence between miners," says Riascos.

The Fairmined standard was developed by the Alliance for Responsible Mining (ARM), a Colombia-based NGO with operations in Latin America, Africa and Asia.

It sets environmental and labor norms and ensures that production benefits local communities.

The gold from La Llanada sparkles in the leaves of the Palme d'Or trophy in Cannes and also in jewelry worn on the red carpet by stars such as the Oscar-winning actress Marion Cotillard.

It is part of what Chopard calls a drive towards "sustainable luxury".

Chopard joined forces with the ARM in 2013 to support La Llanada.

"For me it was very obvious that the Palme d'Or had to go green," Caroline Scheufele, Chopard's artistic director, told AFP in the jeweler's workshop in Geneva.

Regulating mining in a country where nearly two thirds of such operations are estimated to be carried out illegally is a challenge for Colombian authorities.

Gold is currently considered even more profitable than the drug-trafficking that funds armed groups.

"The Fairmined certificate is a way to formalize production and empower mining communities," said Lina Villa, executive director of the ARM.

La Llanada was the second mine in Colombia to be certified by Fairmined. Another cooperative in Iquira, central Colombia, won the certification in 2014.

"The Colombian government has been working hard to replicate this model throughout the whole country," said deputy mining minister Maria Isabel Ulloa in her office in Bogota, referring to the ethical cooperatives.

In the harmonious village with the smoking peak of the Galeras volcano on the horizon, Edison and his friends spend their spare time playing music and singing. Children run around in the street and other miners play volleyball.

The rest of the time they labor to lug rock out of the mine, mill them and sieve them, hoping to glean a gram or two of gold -- for this is still, despite everything, extremely tough work.

"Sometimes you spend more on the work than you earn from it," Edison said. "Mining is always an adventure."