YANGON - The United States has temporarily eased restrictions on trade through Myanmar's ports, a post-election move welcomed on Tuesday by business leaders in the economically booming Southeast Asian nation. 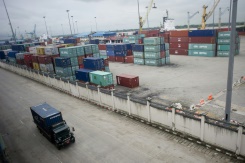 The main Yangon port terminal is run by Asia World, one of the country's largest conglomerates

The policy shift comes after Myanmar held landmark polls last month swept by the pro-democracy opposition party of Aung San Suu Kyi and will make it easier for US companies to deal directly with the country's crucial ports and airports.

Washington lifted most trade sanctions against Myanmar after decades of brutal junta rule gave way to a quasi-civilian reformist government in 2011.

However dozens of junta-era cronies and their sprawling business interests remain on a Washington embargo.

That has made it difficult for businesses to trade with Myanmar because many key export and import points are run by still-blacklisted firms, including Rangoon's busiest port terminal, which handles around half the country's freight.

But in a statement released on Monday, the United States Treasury announced a temporary six-month lifting of those restrictions.

"This is a good opportunity for the country because we lived in a closed system for 50 years, without good access to international trade," Thet Thet Khine, of the Union of Myanmar Federation of Chambers of Commerce and Industry, told AFP.

"The more open a country is to foreign trading, the more it will develop," added the businesswoman, who will also enter parliament next year as an MP for Suu Kyi's party.

The main Rangoon port terminal is run by Asia World, one of the country's largest conglomerates which is owned by Steven Law.

A leaked US diplomatic cable from 2007 described him as a "top crony" to the former regime's generals and the son of a drug lord, accusations he denies. He and Asia World remain on Washington's blacklist.

In a letter to the Treasury department in July, The Clearing House Association and the Bankers Association of Finance and Trade said the ongoing sanction listings could have the unintended effect of a "de facto trade embargo" on Myanmar.

Asia World is one of the country's richest firms having benefited from years of juicy contracts under the junta and has a vast network of interests across the fast-changing nation.

A US embassy spokesman in Rangoon said the temporary easing was a "technical fix" to ensure that exports to and from Myanmar continued.

"This is not a 'reward' for the recent election and does not represent a change in US-Burma sanctions policy," the spokesman said, adding that targeted bans against certain individuals and companies remained in place.