PARIS - France's far-right National Front (FN) is aiming to win control of a region for the first time in its history in elections on Sunday, giving leader Marine Le Pen a launchpad for her presidential bid in 2017. 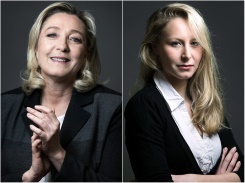 The anti-immigration FN topped the vote in six of 13 regions in last weekend's first round, capitalising on the public's security fears in the wake of the jihadist attacks in which 130 people died.

But it faces an uphill battle to convert that performance into victory after the ruling Socialist Party withdrew its candidates from two key regions and urged their supporters there to back former president Nicolas Sarkozy's conservative Republicans.

The race is expected to be close in several regions. A TNS-Sofres poll on Wednesday showed Le Pen, who heads the party list in the economically-depressed northeastern Nord-Pas-de-Calais-Picardie region, would be beaten by the Republicans' Xavier Bertrand by 53 percent to 47 percent.

In the southern Provence-Alpes-Cote d'Azur region, her 26-year-old niece Marion Marechal-Le Pen was shown trailing the Republicans' Christian Estrosi, with 46 percent to his 54 percent. Other polls gave similar results.

Both women had easily outpaced their conservative rivals in the first round, each grabbing over 40 percent of the vote, but the party's hopes of winning its first-ever region could be crushed by its opponents' political manoeuvring.

The Socialists have pulled out their candidates in the regions where Le Pen and her niece are running and called on voters to back the opposition, a risky tactic as it plays into the far-right's claim that the two main parties are indistinguishable.

A combative Le Pen slammed such tactics as "undemocratic" and accused her opponents of "intellectual terrorism" in seeking to block her party's path to power.

Hammering home her message that the FN offers an alternative route to the main forces of right and left, she vowed if elected to "make the government's life a misery… every day, every week."

Nationwide, the FN took 28 percent of the vote last week, ahead of 27 percent for the Republicans and their allies.

President Francois Hollande's Socialists suffered their fourth electoral beating since coming to power in 2012 as voters punished their failure to cut France’s stubbornly high jobless figures, but held up better than expected with 23.5 percent.

Le Pen has reaped the rewards of her efforts to "de-demonise" the party bequeathed by her father Jean-Marie Le Pen, but it retains a stridently anti-immigrant and often Islamophobic message that she has amplified since last month's carnage in Paris.

Her campaign has also exploited anger over the situation in the northern port of Calais, where thousands of migrants are camping in squalid conditions in the hope of reaching Britain.

Socialist Prime Minister Manuel Valls has called the FN a "fraud" that wants to return France to the "wars of religion" and said he had "no hesitation" in urging voters to back the Republicans to keep the FN from power -- as they did in 2002 when voters switched to Jacques Chirac in a presidential run-off against Jean-Marie Le Pen.

Sarkozy, who has been accused of flirting with the FN's ideas on immigration and Islam, has taken a different approach.

He said a vote for the FN was "not immoral" but they were "people who have never run anything, have no plan, have no self-control, who would create chaos".