ULAN BATOR - Anglo-Australian mining giant Rio Tinto secured a multi-billion deal Tuesday to finance a huge expansion of its giant but controversial Oyu Tolgoi mine in Mongolia, the focus of rising resource nationalism. 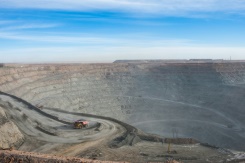 The pit of the Oyu Tolgoi mine in southern Mongolia is pictured on November 30, 2015

Oyu Tolgoi signed the $4.4 billion deal in the Mongolian capital Ulan Bator with international financial organisations and 15 commercial banks, its parent company said in a statement, calling it "an important step forward".

The project has total copper and gold reserves estimated at 2.5 billion tonnes, and forecast earnings of over $100 bn over its lifetime, which could extend beyond the year 2100.

It started production from an open-pit mine two years ago, but the financing paves the way for its second and more valuable phase underground, where the company says 80 percent of reserves lie.

Mongolia has only three million people but an estimated $1 trillion of natural resources lie beneath its empty steppes, and the country enjoyed an economic boom in recent years on the back of foreign investment and mineral exports.

Growth reached an eye-popping 17.5 percent in 2011, but has since been hammered by rising resource nationalism and political infighting over the role of foreign firms in extraction, as well as the global resources bust.

The Oyu Tolgoi project -- which is projected to contribute up to one third of the country's GDP once fully operational -- has been at the centre of the issue, with disputes stalling progress on the underground phase for nearly three years.

But Rio Tinto and the government resolved the row earlier this year as Ulan Bator tries to restore its appeal to foreign investors after incoming direct investment plummeted by three quarters last year.

"Mongolia is back to business," Rio Tinto cited Prime Minister Chimediin Saikhanbileg as saying at the time.

Oyu Tolgoi is nearly 600 kilometres (370 miles) south of Ulan Bator, in the Gobi Desert that covers much of the border region between Mongolia and China -- the final destination for much of its output.

Many Mongolians are increasingly wary of their country’s near-total dependence on its giant southern neighbour, which accounts for 89 percent of its total trade.

It takes four minutes by elevator to descend 1,300 metres to the mine's Hugo North Lift 1 deposit, described by Oyu Tolgoi as "one of the best copper-gold ore bodies anywhere in the world".

At such a depth the temperature is a balmy 25 degrees Celsius, AFP witnessed on a visit last month. Maintenance workers wear blue and orange jumpsuits striped in reflector patches, headlamps and hard hats.

Before development stalled, 16 kilometres of concrete-lined tunnels were built, most of them 10 metres high to accommodate 40-tonne mining machines.

Beyond a submarine-like door, the tunnel becomes wild and windy, with head lamps struggling to penetrate the absolute darkness. They illuminate only an uneven rocky ground and grey dust filling the air.

Mammoth machines lurk in the shadows, waiting for extraction operations to begin.

Over the next five to seven years, the mine will expand to six vertical shafts and over 200 kilometres of tunnels.

Oyu Tolgoi LLC is 66 percent owned by Turquoise Hill Resources, a Rio Tinto subsidiary, and 34 percent by the government of Mongolia.

The open-pit mine has produced 1.5 million tonnes of copper concentrate since it started production in 2013, and nearly $1.3 billion in revenue in the first three quarters of the year.

But despite the minerals boom many citizens remain poor, and concerns have also been raised about environmental damage.