SYDNEY - The Australian government is seeking corporate sponsorship for the Great Barrier Reef, sparking fears Wednesday that companies could potentially use such investments to hide poor green credentials. 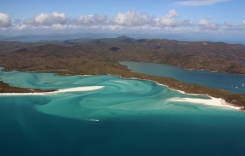 The Great Barrier Reef has been under increasing threat from climate change, farming run-off, development and the coral-eating crown-of-thorns starfish

The world's biggest coral reef has been under increasing threat from climate change, farming run-off, development and the coral-eating crown-of-thorns starfish.

In a brochure entitled 'Partnerships for the Reef', the government-backed Reef Trust said it was interested in sponsorship, joint investment and collaborative arrangements to deliver conservation projects.

It noted these could range from Aus$1 million (US$719,500) to improve seabird resilience to Aus$7 million to help control the crown-of-thorns starfish.

"Your role and commitment to protecting and conserving the Great Barrier Reef will be widely acknowledged," it said.

"All Reef Trust investments will be recognised in branding of project materials, ranging from online publications and reports to social media activities and reef events."

Conservationists have long argued that exploitation of these resources, particularly coal, will risk harming the reef, as the material will have to be shipped out of the area, which is teeming with marine life.

"While private donations for reef protection are welcome they shouldn't be in exchange for advertising rights and they must be on top of adequate public funding, not in place of it," she added in a statement.

"The most alarming part of this proposal is the potential for companies which are threatening the reef to buy positive reef branding to try to avert the reputational damage they deserve."

Environment Minister Greg Hunt, speaking at the 41st meeting of the Great Barrier Reef Ministerial Forum in Melbourne Tuesday, said while federal and state governments were working hard to preserve the World Heritage-listed icon and spending millions to do so, ways to diversify funding had to be explored.

He said the corporate sector, investors, philanthropic organisations and individuals could work in partnership on projects designed to improve the reef's health.