Police told a press conference on Sunday morning that protests against the death sentences handed down in the Koh Tao murders might be politically motivated and have ill intentions.

Pol Maj Gen Piyaphan Pingmuang said there were criminal prosecutions in 126 murder cases involving Myanmar people in Thailand in the past year, but protests in the Koh Tao case were suspicious.

He was referring to protests in Myanmar in the past few days in relation to the case in which two Myanmar migrant workers were given the death sentence for the murder of two British tourists on Koh Tao island in Surat Thani province in September last year.

Some groups took the case of the individuals as an opportunity and general people should not fall victim to the movement or let the issue be politicised, Pol Maj Gen Piyaphan said. He warned that the issue could have an impact on international relations. 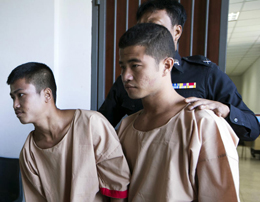 In this Dec. 24, 2015 file photo, Myanmar migrants Win Zaw Htun, right, and Zaw Lin, left, both 22, are escorted by officials after their guilty verdict at court in Koh Samui, Thailand. (AP photo)

He insisted on there being a standard investigation into the murder, saying that as the case involved Myanmar and British people, police had been checked from the start of their investigation by lawyers, prosecutors, foreign authorities and then the court.

Pol Col Prachum Ruangthong, chief of the Koh Phangan police who supervise Koh Tao, said that as the case involved Myanmar and British people and wrongdoers were liable to death sentences, the police investigation had been checked carefully.

The local court of Koh Samui in Surat Thani paid no attention to the initial confession of the two Myanmar men but it focused only on evidence before making the ruling, Pol Maj Gen Piyaphan said. Both men denied all charges during court trial.

He also said that the ruling resulted only from the Court of First Instance and concerned parties should let the justice system handle the case all the way.

Senior police officers supervising the locality of the murders and those responsible for scientific crime investigation assured in the press conference that investigation, scientific examination including that on DNA profiles of concerned people, and checks and balances throughout police investigation were transparent and accountable, met international standard and were proved in the court.

The Thai Foreign Ministry said on its website on Sunday that Myanmar's foreign ministry had denied reports that people protesting the Koh Tao ruling had been “instigated” into taking to the streets. It had found no evidence to support the claim.

Foreign Minister Don Pramudwinai said the Courts of Justice was arranging the translation of the ruling into English so that the international community could understand it.

He would also suggest that the ruling be translated into Burmese to create a better understanding.