Ukraine parish turns into battlefield amid conflict with Russia
World

Ukraine parish turns into battlefield amid conflict with Russia

PTYCHA (UKRAINE) - The quiet village of Ptycha has become an unlikely battleground for the Orthodox faithful in western Ukraine, where the divide between pro- and anti-Moscow factions plays out far from the eastern front of the war-torn country. 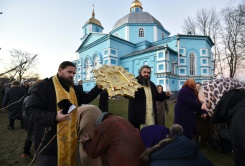 Russian Orthodox priests bless believers after a religious service near the church in the village of Ptycha, in the Rivne region west of Ukraine's capital Kiev on December 23, 2015

Armed with sticks, spades and Molotov cocktails, the Orthodox faithful in the Ukrainian-speaking village this month moved against each other, leaving at least one cleric with a bloodied head, according to video footage that went viral across Ukraine.

Since the outbreak of the separatist conflict in April 2014, passions have steadily risen in the ex-Soviet nation, with tensions crossing political and even religious faultlines.

Now the war pitting the Ukrainian army against pro-Russian separatists in the east has sharply exacerbated those strains, leading to a schism among churchgoers.

In Ptycha, a village of around 1,000 residents some 350 kilometres (220 miles) west of Kiev, parishioners are divided over the blue and white shrine where they worship.

The parish belongs to the Moscow-backed Church but an informal local referendum last year showed that a majority of villagers wanted it to come under control of the Kiev Patriarchate.

"The annexation of Crimea and the war in the east have clearly shown which church is really Ukrainian," Father Ilarion, the head of the diocese of the Kiev Patriarchate in the western Rivne region, where the parish is located, told AFP.

"The priests of the Moscow Church hold services in Russian, they refuse to pray for the Ukrainian army and hold burial services for Ukrainian soldiers killed at the front."

After the improvised plebiscite, clerics of the two churches took turns to conduct services at the Ptycha shrine.

But the fragile equilibrium was upended when a Kiev court in early December ruled that the parish belonged to the Moscow-backed Orthodox Church.

Several priests and believers of the Russian Church then barricaded themselves inside the place of worship, and skirmishes ensued.

Dozens of police officers swarmed to the village to guard the shrine as clerics were forced to conduct services in the church yard.

After the nearly week-long standoff, food was finally allowed to be passed on to those holed up in the church and heating was switched on.

"According to the law, this church is ours. It is unacceptable to take turns to conduct services here," Father Andriy of the Moscow-backed Ukrainian Orthodox Church told AFP.

The local priest has also come under pressure, with someone scrawling "Glory to Ukraine! Glory to the heroes!" -- the slogan of Kiev's pro-European protesters who toppled a Russia-backed president in February 2014 -- outside of his home.

Nadiya Kalinina, a local pensioner, defended the priest who she said "had been serving here for more than 45 years."

But many locals have condemned her, calling the woman a "separatist", a reference to pro-Russian rebels fighting government forces in a conflict that has claimed more than 9,000 lives.

"The war has provoked all of this," sighed Kalinina.

The Moscow-aligned Church claims that the churchgoers whose allegiances lie with the Kiev Patriarchate have received support from members of the ultra-nationalist Right Sector movement.

Russia, which is accused by Kiev and the West of fuelling the separatist insurgency, denounced the religious conflict, calling it "an unacceptable assault of radical nationalists and schismatics of the Ukrainian Church."

At the start of the year, the Kiev-aligned Orthodox Church, which is strongest in central and western Ukraine, claimed around 16.3 million faithful, according to the Democratic Initiatives Foundation.

The Moscow-backed Church had 7.8 million believers, mainly in eastern and central regions.

Father Ilarion said the conflict with the pro-Russian rebels has prompted around 100 parishes of the Ukrainian Orthodox Church to switch their allegiances to the Kiev Patriarchate over the past year.

"The churchgoers have begun to understand that they were deceived (by the Moscow Patriarchate)," he said.

Many in Ukraine now want Kiev-Pechersk Lavra -- one of the most revered sites of Orthodox Christianity also known as the Kiev Monastery of the Caves -- to be transferred under the jurisdiction of the Kiev Patriarchate.

More than 10,000 residents of the Ukrainian capital in December signed an electronic petition advocating the handover of the monastery that dates back to the 11th century.

Patriarch Filaret, the head of the Kiev-based Ukrainian Orthodox Church who supported the Kiev uprising, urged the faithful to wait.

"The monastery will be Ukrainian, we should have a little patience," he said recently.