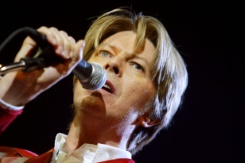 A master of reinvention whose career spanned two generations, he dazzled millions with his taste for experiment, taking on everything from glam rock and soul to electronica and punk.

He marked his 69th birthday by releasing his 25th studio album, the jazz-inspired Blackstar, hailed by many as one of his most innovative yet.

Delighted critics heralded a new musical era for the star.

Just two days later Bowie's family made the shock announcement of his death via social media, revealing that the star had endured a secret 18-month battle with cancer.

Testament to his status as an entertainment legend, fans worldwide refused to accept the news, instead insisting it was a hoax, struggling to believe a star that had touched every musical generation since the 1960s could be gone.

Recurring themes in his songs were angst, fear and alienation, sexual ambivalence or self-destructive lifestyle, yet there were also upbeat dance-floor songs, such as "Modern Love" and "Let's Dance."

Tony Visconti, who produced several Bowie albums, said the evergreen singer's music had in recent years become more complex than in his prime.

Bowie was "an innovator who proved time and again that the only way to make music a vital part of our culture is to continue to break the rules," he said, adding Bowie could reinvent himself "because he killed off his older personas."

Bowie sold an estimated 140 million records worldwide but the scale of his influence goes far beyond sales, with musicians from Lady Gaga to Blur citing the importance of his work on theirs. In 2013, the traveling exhibition "David Bowie Is", launched in London and attracted more than one million visitors.

Born David Robert Jones in Brixton, south London on January 8, 1947, his family moved out to the leafy suburb of Bromley when he was six.

He changed his name to avoid being confused with The Monkees singer Davy Jones.

Bowie's eponymous first album was released in 1967 but it was "Space Oddity" that first caught people's attention.

Then in 1972 with his first re-invention as the androgynous Ziggy Stardust, he hit the big time. He brought his love of mime, fashion and theatre to his music -- enabling him to challenge traditional views on style, gender and sexuality.

In 1973 he moved on to create the Aladdin Sane persona and two years after that made his breakthrough in the US with "Fame", co-written with John Lennon and Carlos Alomar.

From 1976 to 1979, during his Berlin period, he produced a trilogy with Brian Eno (Low, Heroes and Lodger).

His album "Let's Dance" in 1983, which included hits such as "Modern Love" and "China Girl", conquered a younger audience on the dance floor and was his biggest-selling album to date.

He married Somali supermodel Iman in 1992, with whom he had a daughter, Alexandria, and after a period living in Switzerland the family decided to split their time between London and New York.

True to form, he was an online musical pioneer, releasing his 1999 album "Hours" on the Internet and sharing his news and passions on a website.

Alongside his music career, Bowie took on regular film roles, from "The Man Who Fell to Earth" in 1976 to starring alongside Michael Caine and Scarlett Johansson in the period film "The Prestige", months before his 60th birthday.

He declined a knighthood in 2003 and suffered a minor heart attack in 2004 which cut short his "A Reality Tour" concert schedule, after which he kept a relatively low public profile.

In 2009 "Space Oddity" was re-released, and then in 2013 he released album "The Next Day," which provided his first UK number one for 20 years and his highest entry (number two) on the US billboard charts.