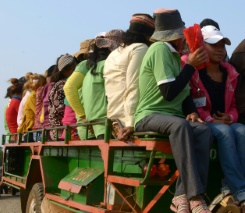 Many of Cambodia's 700,000 garment workers travel to their factories in overcrowded vehicles to save money

Thirteen of the 68 injured workers were in critical condition, the official added.

Many of Cambodia's 700,000 garment workers travel to their factories in overcrowded vehicles to save money.

The trucks transporting them are routinely involved in accidents on the country's notoriously dangerous roads.

Last May, at least 19 Cambodian garment workers were killed and dozens injured in a van crash in eastern Svay Rieng province.

Cambodia's multi-billion dollar garment industry is a key source of export earnings for the impoverished kingdom.

The government said it would raise the minimum monthly wage for garment workers by nearly 10 percent to $140 in January, which fell short of union demands.

Cambodian police arrested a number of garment workers last month after breaking up a pay protest with water cannon at a factory near the Vietnam border.