TOKYO - Japanese pop fans were rocked by news Wednesday that evergreen boy band SMAP is mulling a breakup, ending the group's 30-year reign at the top of the music business that has won them legions of fans across Asia. 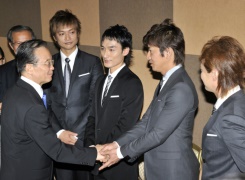 One of Japan's most popular and longest enduring bands, the heartthrobs soared to the top of the charts with sugary pop songs and choreographed dances, but may split following a feud within their agency, according to reports.

SMAP was established as just another ubiquitous teenage boy band, but backed by the powerful Johnny and Associates agency its members have flourished -- as a group and also in their solo careers as actors and fixtures on popular variety shows.

"It is true that such talks and negotiations are ongoing," the agency said in a statement, referring to the reports without providing further details.

The wrangling was reportedly sparked by tensions between the agent in charge of SMAP and other top Johnny & Associates managers.

Speculation about the group's future was top news on social media as forlorn fans lamented the possible split.

Another user wrote emphatically: "Can never accept SMAP breaking up!!!"

Takuya Kimura, the most popular member who starred in the Wong Kar-wai film "2046", is the only member expected to stay with the agency, reports said.

SMAP, which cryptically stands for "Sports Music Assemble People", started out as a fresh-faced boy band in 1988. Despite sometimes obvious musical shortcomings, they are still the top J-pop boy band -- even though the members now range in age from 38 to 43.

They retain an enormous fan base among women in their 40s who came of age as the band hit the big time, and who remain the core viewers for the formulaic television dramas starring various members of the quintet.

Their popularity has also reached diplomatic heights, with the band meeting then Chinese premier Wen Jiabao in Tokyo in 2011.

Helicopter crashes with India military chief on board, at least 3 dead

Meta to ban all Myanmar-army controlled businesses from platforms