MIAMI - The United States warned pregnant women to avoid travel to 14 countries including Brazil due to the mosquito-borne Zika virus, which has been linked to birth defects. 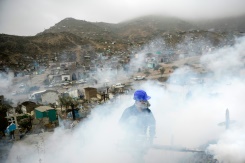 A specialist fumigates the Nueva Esperanza graveyard on the outskirts of Lima to prevent mosquito-borne Zika virus virus.

"The virus is spreading fairly rapidly through the Americas," said Lyle Petersen, director of the division of vector-borne infectious diseases at the US Centers for Disease Control and Prevention, in a conference call with reporters late Friday.

"We thought it was very important to warn people as soon as possible."

"Pregnant women in any trimester should consider postponing travel to the areas where Zika virus transmission is ongoing," said the CDC.

Zika virus can cause fever, rash, joint pain and conjunctivitis, with symptoms usually lasting under a week.

But in pregnant women, the virus can spread to the fetus and cause brain shrinkage or death.

Along with a rise in Zika cases in Brazil, more than 3,500 cases of microcephaly have been documented in the country between October 2015 and January 2016.

Four of those cases have recently been analyzed, showing that babies were infected with Zika virus while they were in the womb and that it reached their brains.

Two of the cases involved miscarriages, and two of the babies died soon after birth.

"All four mothers reported having experienced a fever and rash illness consistent with Zika virus disease during their pregnancies," said the CDC.

"Genetic sequence analysis showed that the virus in the four cases was the same as the Zika virus strain currently circulating in Brazil."

Experts say they don't know just how much of an increase Brazil is experiencing in microcephaly, but that there is a rising number of cases.

The virus appears to destroy brain tissue that had already formed, resulting in smaller brain sizes and birth defects.

"Until more is known, and out of an abundance of caution, CDC recommends special precautions for pregnant women and women trying to become pregnant."

Those who are trying to become pregnant "should consult with their health care provider before traveling to these areas and strictly follow" steps to prevent mosquito bites, including wearing long sleeves and pants and applying insect repellant.

There is no vaccine to prevent Zika and no medicine available to treat it.

There have been 26 travel-related cases of Zika virus in the United States since 2007, but no locally acquired cases so far, Petersen said.