France to probe risks taken by soldiers in deadly avalanche 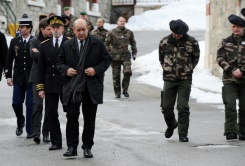 A Frenchman, Italian, Nepalese, Moldovian and Albanian were killed in the French Alps avalanche, their diverse origins typical of the storied military branch -- historically seen as offering misfits and troublemakers a second chance in life.

Another eight soldiers were injured as the group was swept away during a training exercise near the resort of Valfrejus, some 60 kilometres (35 miles) south of Albertville, the host city of the 1992 Winter Olympics.

Defence Minister Jean-Yves Le Drian visited the morgue to pay his respects to those killed before visiting the injured in hospital.

The men were aged between 21 and 33, and the eldest was a Madagascan who, like many in the Foreign Legion, was given French citizenship after five years of service.

Le Drian said the group in training, members of the mountain infantry, was to be deployed to Mali, Chad and the Central African Republic.

"The investigation will show if appropriate precautions were taken in view of the risks," said the minister.

"Military training involves risk, especially in a hostile environment like a mountain. It prepares our soldiers to take part in difficult operations, with the aim to better protect us."

It was the second mountain tragedy in France in the space of a week after two French high school pupils and a Ukrainian tourist died in an avalanche nearby on Wednesday.

"Snow fell at the end of November onto warm ground then began to change," said Dominique Letang, director of the National Agency for the Study of Snow and Avalanches (ANENA).

"The base level of the snow is not sticking together. It's something that is neither sticking to the ground nor the snow that is falling on top of it," added Letang.

Dozens die each year in avalanches in France's popular ski resorts. At least 45 people died in snowslides during the 2014-15 winter season in France, according to ANENA, more than double the previous year.

The deadliest avalanche in France's history occurred in 1970 when 39 people were killed after an avalanche buried their chalet at the Val d'Isere ski resort.

The victims of Monday's accident were among a group of about 50 soldiers taking part in the skiing exercise.

The snowslide, which took place in the early afternoon in an area that was not part of a ski resort, engulfed a total of 13 skiers in the group, who were equipped with avalanche victim detectors.

Three helicopters were deployed for the search, as well as five police dogs and three doctors.

Albertville prosecutor Jean-Pascal Violet said interviews with the survivors were under way "to try to understand what happened and why".

A snow and avalanche expert will examine the site "as soon as conditions allow", Violet told AFP, adding that autopsies would begin Wednesday.

The regiment to which the soldiers were attached is specialised in mountain warfare and all the members have military skiing qualifications.

The unit experienced a similar tragedy in 2012 in the Alps when an avalanche swept away five of its members, leaving one dead.

The French Foreign Legion was created by King Louis Philippe in 1831, a new unit made up of foreign volunteers, mostly unemployed soldiers after the end of the imperial wars and revolutionaries from around Europe.

Many no longer had any papers and they thus assumed a new identity upon signing up, allowing them to start a new life.

"A large part of the myth and mystery surrounding the Legion comes from this 'second chance' offered to those who accept its rules," reads the Legion's website.

More than 35,000 legionnaires have been killed in action fighting for France and they see themselves as "foreigners who have become sons of France not by blood received but by blood shed".